The Sentinel Project ran a pilot misinformation management project in Sri Lanka from July 2021 to December 2021. This article examines the trends and patterns of misinformation observed in 2021 as a result of the project’s monitoring work, summarises some of the lessons learned, and suggests a way forward.

Trends and Patterns of Misinformation in Sri Lanka through 2021 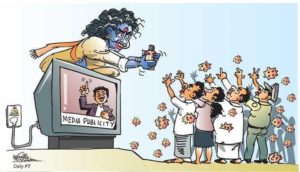 As the country continued to experience wave after wave of case surges, the COVID-19 pandemic dominated the misinformation landscape in 2021. Misinformation about vaccines and cures was especially prevalent, possibly as a result of government-sponsored media campaigns promoting local cures until late 2020, as depicted in a cartoon by Wasantha Siriwardena. Misinformation that promoted vaccine hesitancy, in particular, claimed that the vaccine could result in reproductive issues such as babies with birth defects, subfertility, or infertility. It is interesting how reproductive health misinformation persists in Sri Lanka, perhaps indicating the need for comprehensive sexuality education. Furthermore, misinformation about various COVID-19 variants and procurement processes related to control measures were widespread. Ethnic and religiously motivated misinformation about the pandemic was also observed in 2021, particularly in relation to the forced cremation policy. This was a continuation of the trend seen at the start of the pandemic in 2020 when the Muslim community was vilified as “super-spreaders.”

Misinformation about the economic crisis was almost as prevalent as COVID-19-related misinformation. Common sub-themes included the foreign exchange crisis, national debt, taxes, rising living costs, prices of essential goods, and import restrictions. This demonstrated the public’s ignorance of issues concerning public finance and policies, as well as the general inaccessibility of lay-person-friendly economic information. Misinformation about people’s daily struggles was common, for example, in relation to the fertiliser ban, the ferry accident in Kinniya, gas shortages, and accidents involving gas cylinders. Rumours about incidents that occurred in other countries gained traction here when they were relevant to the local economic issues at the time (for example, information on food shortages in Australia, fuel shortages in the UK) and were used to justify the scarcity in Sri Lanka.

Politically motivated false information about the government and the opposition was also widespread, particularly on Facebook meme pages and gossip websites, often tied to a statement or an action by the politician involved. False information targeting alternative political parties, such as the Janatha Vimukthi Peramuna (JVP) or the National People’s Power (NPP), was a distinct sub-theme under the larger politically motivated false information umbrella. The JVP and the NPP were frequently the targets of coordinated and inauthentic social media campaigns, and it was also interesting to note that certain social media users tended to present themselves as members of the JVP or the NPP and spread false information that aimed to tarnish the reputation of said parties. Members of the JVP were frequently linked to COVID-19-related disinformation, too, such as using their available phone numbers in bogus flyers offering cheap antigen kits, oxygen cylinders, and so on, as well as in anti-vaccine posts.

Rumours about protests and acts of dissent, such as the teachers’ and university students’ strikes, were common, as was false information about activists. During the monitored period, environmental activists were the most common target. It is safe to say that false information directed at actors who question the government and the status quo, in general, has emerged as a sub-theme, with the goal of stifling free speech and dissent.

Throughout the monitoring period, ethnically, racially, or religiously motivated false information (especially anti-Muslim and anti-Islamic) did not usually occur in isolation. They were almost always linked to some current incident or another. This contrasts with reproductive health-related anti-Muslim misinformation that was prevalent in the past few years, such as claims about pills or clothing that cause infertility, which resulted in communal violence in 2018 and culminated in the false accusation of a Muslim gynaecologist in 2019 alleging that he sterilized 4,000 Sinhala Buddhist women after cesarean deliveries. In 2021, the tendency to spread anti-Muslim rumours was very much present, just beneath the surface, as evidenced by the anti-Muslim speech that occurred in the aftermath of the Sialkot lynching. Hashtag Generation’s Annual Report about online harmful speech in Sri Lanka stated, “…Muslims constituted the most targeted ethno-religious group by online harmful speech in 2021”.

Rumours about the environment, particularly deforestation, as well as the X-Press Pearl maritime disaster, were widely circulated. This took a gendered turn when Forest Officer Devani Jayathilaka and ‘Sirasa Lakshapathi’ contestant Bhagya Abeyrathna, both of whom were outspoken opponents of deforestation, became targets of disinformation campaigns, particularly those claiming that they are affiliated with the JVP and the NPP, some even going to the extent of implying that Devani Jayathilaka has a romantic interest in Anura Kumara Dissanayaka, the leader of the JVP. Bhagya Abeyrathna also faced a lot of gendered hate speech.

Governance-related misinformation was also prevalent, falling under the sub-themes of extravagant lifestyles of politicians and their immediate circles, political appointments, and corruption. False information about China’s influence in Sri Lanka was also widespread.

Throughout the pilot project, only manual screening of misinformation was done by monitoring pre-identified actors (social media handles that are prone to spreading misinformation), gossip sites, and news outlets. We need to use information technology and artificial intelligence-based systems more, if we are to get a good picture of the amount of misinformation out there. Increased use of IT and AI-based systems should be accompanied by increased social media presence across multiple platforms, ideally under the same handle (ex. @LKAWikiRumours), so the public can easily tag us in things they want us to verify, without expecting them to take time to forward those to us via a separate WhatsApp or another channel. Those social media handles can also be used to proactively disseminate verified information to the public, rather than waiting for them to visit our WikiRumours platform.

The exercise’s primary limitation was the limited public participation in the rumour tracking and reporting process. It has been impossible to track rumours at the local grassroots level due to a lack of public engagement. The two Project Coordinators were the database’s only sources of input, and the rumours that got reported and those that did not get reported were influenced to some extent by their personal biases, while the nature of the rumours depended on where they looked for rumours. The reasons for the limited public engagement were the exercise’s short timeframe and the uncertainty about the project’s continuation, which limited outreach and branding efforts. Because the majority of the rumours recorded came from the internet and social media, it was difficult to track the origin of a given rumour and gather meaningful geographic implications, which would be useful in preventing violence. Moving forward, community volunteers who can report rumours that spread on the ground should be recruited from all over the country.

In terms of platforms monitored, Facebook was the most proactively monitored, followed by WhatsApp. This excludes misinformation published on YouTube, which has been identified as a hotbed of misinformation in Sri Lanka, with some people who have been banned from Facebook for violating community standards switching to YouTube as their primary social media presence (ex. Amith Weerasinghe, the leader of a Sinhala nationalist group called Mahason Balakaya). Extending to YouTube and possibly TikTok is critical.

Our verification efforts should always be linked to reporting to the relevant social media platforms, because while our audience is limited, false information on a given platform remains visible to a larger crowd until the platform posts a disclaimer from a fact-checker. Exploring synergies with other fact-checkers who have already established trusted partner channels with social media platforms is therefore essential.

Sri Lanka is currently experiencing an unprecedented economic crisis, and there have been protests throughout the country since March 2022, calling for the government, especially the president, to resign. Against this backdrop, new themes of misinformation have emerged. Misinformation about the roots of the economic crisis and how to get out of it, including the involvement of the IMF, are especially prevalent, followed by misinformation about constitutional and legal implications of protests and the government’s responses to those, such as declaring a state of emergency, use of force by the police, and deployment of the army. Misinformation about fundamental rights and freedoms, such as the right to speech and the right to dissent, is also on the rise.

It is evident that fact-checking false information after they occur is not enough to counter these new waves of misinformation. To combat this, it is critical that organisations that counter misinformation currently form and strengthen synergies among themselves and social media platforms, as well as link their efforts with proactive disclosure of correct, quality information, through partnerships with think tanks and other credible information generators that are already in operation. A reactive approach to misinformation was never sufficient, now even more so. A proactive approach should be taken, which seeks to prevent misinformation from occurring in the first place. The Sri Lanka Press Institute established a Fact Checkers Forum in Sri Lanka in April 2022, which is a commendable first step in strengthening synergies among existing fact-checkers. Exploration of partnerships with credible information generators, on the other hand, has been woefully lacking. It is critical that we address that gap, as ill-informed and frustrated people, such as the current Sri Lankan populace, can easily be misled and be incited to violence.