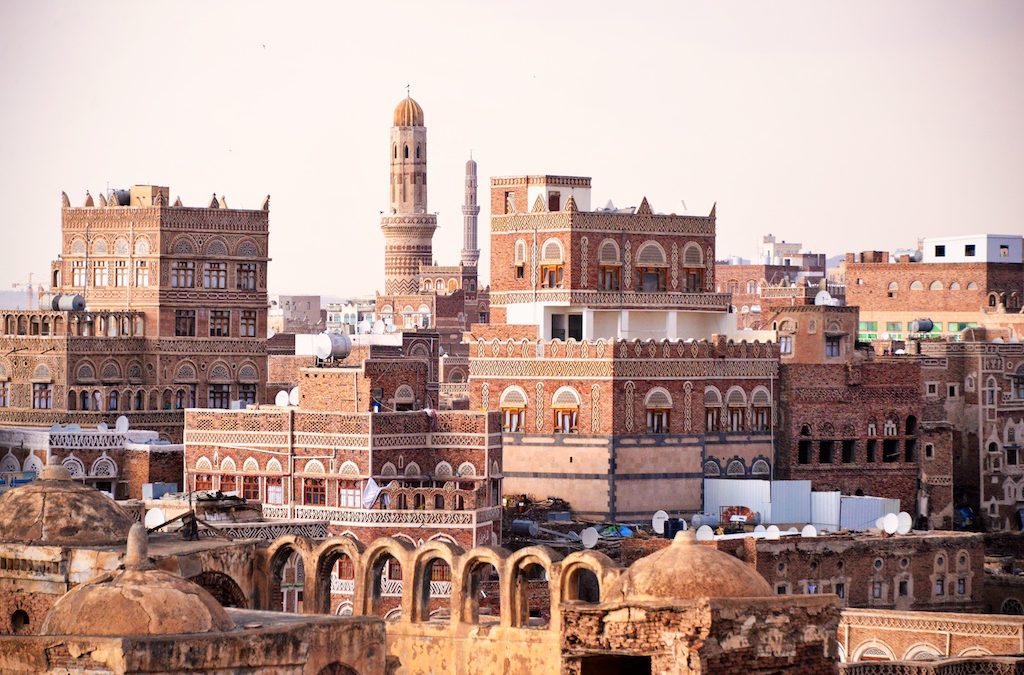 This photo of Sanaa, the capital of Yemen by Rod Waddington was available via Wikimedia Commons

Although the Sentinel Project does not currently have an active presence in Yemen, the country’s brutal, ongoing conflict is a situation of concern that our team has been monitoring over the past few years. Yet, despite the scale of the war and attendant human suffering, international attention to the war has been minimal and fleeting. In this blog post, we seek to highlight the dire situation in Yemen, clarify some of the main points related to the crisis, and reinvigorate efforts to stop the suffering that Yemenis are enduring.

What is the background to the current crisis?

Although the roots of the crisis in Yemen can be traced quite far back into the country’s history, many observers mark it as beginning shortly after the Arab Spring uprising in 2011. The revolutionary moment, which swept much of the Arab world, brought Abdrabbuh Mansur Hadi to power after long-time president Ali Abdullah Saleh was forced out of office (BBC; CFR).

Recognizing the instability of the new government, the Houthi movement – which has been fighting against the Saleh government since the early 2000s – took control of the Saada Governorate in northwestern Yemen. Everyday citizens (as well as other actors) started supporting the movement, which gradually gained enough power to take over Sanaa, the national capital in late 2014. As a BBC article notes, “after four days of heavy fighting centred around a major military base in the north-west of Yemen’s capital, Sanaa, Houthi gunmen walked up to government institutions across the city and asserted their control without a shot being fired.” In March 2015, Hadi had to escape from his palace in Aden after the Houthi movement and its supporters sought to control the whole country. He eventually left the country entirely in order to seek refuge in Saudi Arabia.

In the same year, perceiving the new, widespread Houthi presence as a threat, Saudi Arabia led a coalition of countries mostly made up of other Arab states to intervene in support of Hadi. Certain Western countries also backed the Saudi-led coalition. Hadi’s government now has a base in the city of Aden but it is largely non-functional and the president himself is still living in exile in Saudi Arabia (BBC; CFR).

What is going on today?

The civil war is ongoing and complex. Each side has a number of local, international, and non-state supporters, such as Iranian support for the Houthis and Saudi support for their opponents. At the same time, there is an intricate and fluid web of smaller conflicts happening between different groups (CFR). This situation presents opportunities for violent extremists to operate, such as Al-Qaeda in the Arabian Peninsula (AQAP), which has a presence in the southern part of the country (CFR).

Violence escalated even further in 2017 when a fragile alliance between the Houthi movement and former president Saleh and his supporters broke apart. The movement again forced its control over Sanaa and Saleh was killed. And, as BBC reports, in 2018, the Saudi-led coalition took the politically strategic, and economically important, port city of Hudaydah (also spelled Hodeidah). Fighting over other territories and cities continues today.

Beyond the longstanding violence between armed groups, why is the crisis so dire?

The situation in Yemen is grim and the international community must pay closer attention to it. The United Nations Office for the Coordination of Humanitarian Affairs (OCHA) noted in December 2020 that:

Furthermore, it is highly likely that war crimes and atrocity crimes have already occurred and will continue.

Most importantly, attention must lead to action to alleviate the widespread effects upon Yemeni society, including the increasing number of indirect, civilian casualties. Indeed, beyond casualties resulting from fighting, the impact on the broader population has been enormous. The seemingly intractable civil war is becoming widely known as the worst humanitarian crisis in the world (CFR; United Nations). For instance, CFR reports that poverty, food insecurity including famine, and disease have caused many more indirect fatalities. CFR points out that “with a poverty rate of more than 50 percent, Yemen was the Arab world’s poorest country even prior to the conflict.” The widespread and ongoing food shortage is impacting an estimated 20.1 million people. Combined with non-functional governments, crumbling infrastructure, and a lack of basic necessities and services resulting from the war (Human Rights Watch), the protracted nature of the conflict is exacerbating all of these already dire problems that touch every facet of society.

What will happen from here on out?

There is much speculation about the future of the current stalemate between Yemen’s warring parties, who signed a peace accord in Stockholm in 2018, as well as the humanitarian crisis. However, despite the signing of the accord informally known as the Stockholm Agreement, CFR notes that “UN-backed peace negotiations have made limited progress.” CFR further points out that “there has been little success in implementing the accord’s provisions.” CBS similarly describes the complexities of the war, and how a ceasefire is difficult to achieve due to the numerous actors and political intricacies involved.

Nevertheless, we must continue to push for more attention to be paid, and for action to be taken, to stop the suffering in Yemen. This is a catastrophe on an unimaginable scale and we cannot allow it to be forgotten.