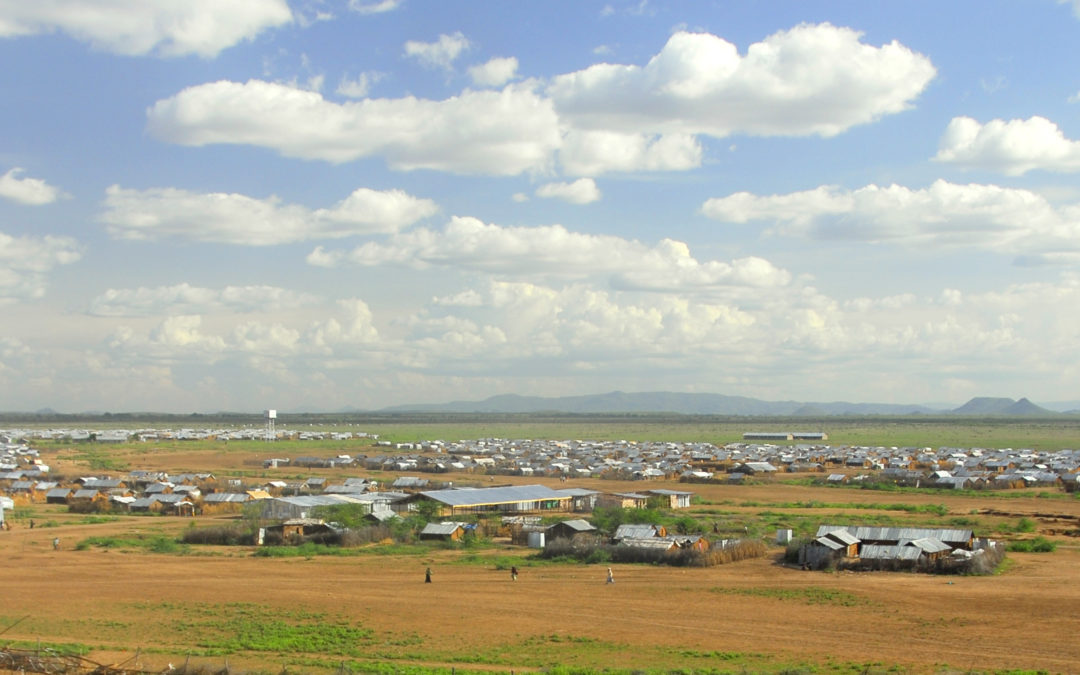 This landscape photo of Kakuma Refugee Camp by Matija Kovac was available via Wikimedia Commons.

In March 2021, the Kenyan government issued a 14-day ultimatum to the United Nations High Commissioner for Refugees (UNHCR) to develop a plan to close the Kakuma and Dadaab refugee camps in the country. If the UNHCR were to miss the deadline, Devon Cone, Senior Advocate for Women and Girls at Refugees International stated that “the Kenyan government has threatened to forcibly return refugees to unsafe countries.” The UNHCR presented the government with a plan at the beginning of April 2021.

This sudden call to shut down the camps prompts a discussion regarding their closure, most importantly by those who will be directly impacted by it. Established in 1992, Kakuma Refugee Camp is located in north-western Kenya. As of January 2021, the refugee and asylum-seeking population is mainly made up of people who had fled from South Sudan, Somalia, and Ethiopia. The Dadaab refugee complex in Garissa County, eastern Kenya, was created around the same time as Kakuma. Dadaab is mainly populated by refugees and asylum seekers who escaped a protracted civil war in Somalia as well as natural disasters such as drought. Refugees and asylum-seekers from South Sudan, Eritrea, Ethiopia, Burundi, and Uganda also make up a part of the population (CARE). Dadaab currently has a population of 218,873 and is, therefore, one of the largest refugee camps in the world.

The rest of the blog is an interview with Nhial Deng who is a part of the Sentinel Project team in Kenya, where he works as a coordinator implementing the Una Hakika (Swahili for “Are you sure?”) misinformation management project in Kakuma Refugee Camp. Having lived in Kakuma for over a decade, Nhial has deep insights into its history and what the future closure means for its residents.

What is the history behind the Kakuma and Dadaab refugee camps? Why do they exist?

Kakuma Refugee Camp was created in 1992 after the Lost Boys of Sudan arrived in Kenya. The Lost Boys of Sudan were a group of young boys who fled from southern Sudan, first to Ethiopia, and then eventually settled in what is now known as Kakuma. In addition, large groups of Ethiopian refugees left their country following the fall of the Ethiopian government and most of them also settled in Kakuma Refugee Camp.* Around the same time, Somalia had similarly experienced civil war, famine, and drought, which caused people to flee. The majority of the people from Somalia settled in the Dadaab refugee complex, which is geographically closer to Somalia.

Apart from being safe havens for people forcibly displaced from their countries as a result of persecution, human rights violations, and armed conflict, Kakuma and Dadaab are economic hubs. Located in the north-western region of Kenya, the Kakuma market is booming and busy every day. Refugee entrepreneurs help the market to flourish and they are rapidly growing the camp’s vibrant economy. Refugees are not simply passive consumers of aid. Instead, they are actively involved in the local economy with more than 2,000 businesses in Kakuma Refugee Camp and more than 200 shops in Kakuma town. Total household consumption in Kakuma, including both the camp and town, is $56.2 million dollars per year. This means that refugees are pumping millions annually into the local economy and, most importantly, the camp is open to outside investment.

Located in eastern Kenya, Dadaab comprises three camps: Hagadera, Dagahaley, and Ifo 1. Each of the Dadaab camps has its own market and market characteristics; together, these camps form a vibrant and diverse market where both host and refugee community members provide and purchase a variety of goods and services.

News reports point out that, since at least 2016, insecurity is the Kenyan government’s common, publicly-stated reason for closing these 30-year-old camps. For example, Reuters notes that “Authorities in Nairobi first announced their intention to shut the Dadaab camp back in 2016, citing national security concerns over infiltration by militants from the Somalia-based Islamist group al Shabaab.” In your opinion, why has the Kenyan government decided to close the Kakuma and Dadaab refugee camps?

I am not well informed on the exact reasons why the Kenyan government wants to shut down both Kakuma and Dadaab but I am afraid that the whole idea of closing these camps is being politicized. In recent years, the Government of Kenya had been threatening to close down Dadaab and this year it added Kakuma to the chain.

As noted above, some observers point out that the Dadaab refugee camp has been used to recruit members of al-Shabaab. Do you think that the camps pose a threat to security in Kenya? If not, why do you think that the Kenyan government has used this justification?

Politicians around the world associate refugees and asylum seekers with all the bad characteristics that you could think of. They are called things like terrorists, criminals, and rapists. This is actually not a new thing and Kenya is not the first country to use these terms. However, these claims are misleading. It is not a crime to flee your country and no one leaves their country by will. I am not a security expert and I’m not sure about the justification and reasoning used by the Government of Kenya in this context but I believe that the whole idea to close the camps is being politicized.

In the joint statement issued by the United Nations High Commissioner for Refugees (UNHCR) and the Government of Kenya in April 2021, the set of options available to refugees and asylum seekers in Kenya “includes voluntary return for refugees in safety and dignity, departures to third countries under various arrangements, and alternative stay options in Kenya for certain refugees from East African Community (EAC) countries.” Here is a breakdown of these options in my understanding:

Do you foresee any challenges with this approach? Is it safe for refugees to return home to Somalia or South Sudan (or wherever else)?

I see this approach as premature and I am afraid that it will not allow for a dignified return of refugees to their home countries or for a smooth pathway to local integration in Kenya. It is not safe for refugees to return to Somalia, South Sudan, and the Democratic Republic of the Congo, among other countries. As much as some parts of these countries might be stable, the countries, as a whole, are still in turmoil, and forcing refugees to return will just give them a traumatizing back-and-forth journey.

Is there anything else that you would like to add? What do you think is important for an international audience to know about the situation on the ground?

When I fled my country eleven years ago, I was lost and devastated. I walked for two weeks to reach safety in Kenya’s Kakuma Refugee Camp. I was able to find solace, healing, and hope in Kakuma and I was happy to enroll in school once again. I knew right away that education was the only way for me to secure a more hopeful and brighter future. I knew that If I was not a student then I was nothing. I attended the camp’s primary and secondary schools, graduating from the latter in 2018. I am forever grateful to Kenya because this education opened many pathways for me.

In two months, I will be moving to Ontario, Canada to study at Huron University College, which is affiliated with the University of Western Ontario. This opportunity was made possible by the prestigious International Presidential Scholarship. I will forever consider Kenya as a home and I hope to return to East Africa after my studies in order to contribute to the development, peace, and prosperity of the region.

It is never easy to navigate the ups and downs of life in a refugee camp, especially not as a young person. Every day, you wake up with hopes and dreams but they are crushed by the fear of being confined to the camp for the rest of your life. I know people who have lived here for more than two decades and they still have no idea when they will get out of this place. It is not just one or two times that I have felt like I do not matter and that I am not a full human being. It happens all the time. I get angry sometimes and ask myself why the world would want to cage human beings with dreams and aspirations in remote places and pretend that they do not exist. A refugee camp is not conducive to human growth. It kills your spirit. However, every time that I go to a school and sit in a classroom, this feeling changes and I think about a brighter future instead.

The two most important things to keep in mind are, first, finding appropriate solutions to the long-term problems of the camps, and second, only closing the camps if absolutely necessary, and in a safe, considerate, and well-timed manner. No one will wait for the UNHCR or the Kenyan government to repatriate them back to their home countries if those places suddenly become peaceful. If there is peace then everyone will pack their bags and go home happily because that is their only dream. People stay in refugee camps because it is their only option.

** “Third country” is a term commonly used in the field of migration to refer to refugees and asylum seekers who are not in their country of origin, and who are planning to go to another country.