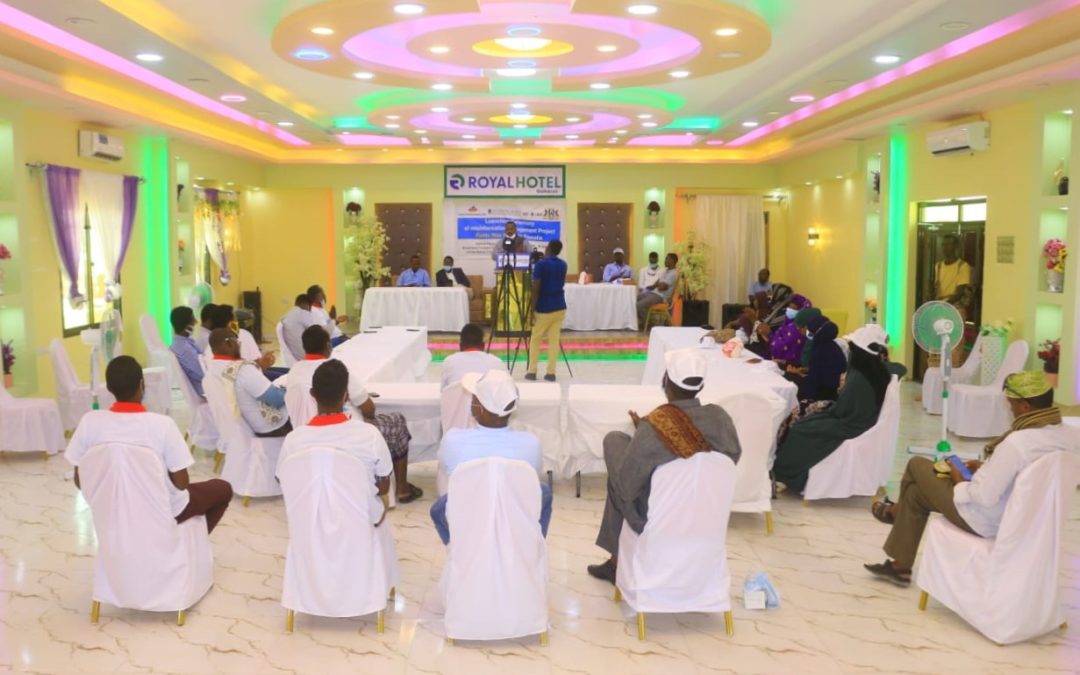 With contributions from Ahmed Gelle of the Manaal Relief Foundation

The Sentinel Project recently launched a misinformation management pilot project together with an organization in Somalia called the Manaal Relief Foundation (MRF). The pilot project is taking place in the Gaalkacyo District, located in the north-central Mudug region of the country.

Gaalkacyo has long been a clan-divided city and even a cursory overview of its modern history reveals a complex and elaborate political milieu. In general, the current threats affecting the civilian population of Gaalkacyo include armed conflicts over natural resources, such as land and water, clan conflicts, political instability (on local, regional, and national levels), terrorist activities by al-Shabab, and domestic violence, including sexual and gender-based violence (SGBV). For the sake of clarity, we will focus on five main points in describing the context here.

(2) Administrative divisions – The city is made up of the two administrative areas of Gaalkacyo North and Gaalkacyo South. Gaalkacyo is also divided between two federal states, Puntland, formed in 1998, which administers the North, and the Galmudug Interim Administration (GIA), established in 2015, which administers the South. Gaalkacyo North is mainly inhabited by members of the Darood clan who govern Puntland State. Most of the members of the Hawiye clan live in the South and govern the GIA. Other clans who live in the city are the Madhibaan, Dir, and Mareehaan peoples.

(3) Clan-based conflict – Historically, Gaalkacyo was delineated between clan-based zones, formally by the “Tomaselli” line, which was instituted by former Italian colonial authorities. Following its independence from Italy, Somalia was governed from 1969 to 1991 by Siyaad Barre, who, “unlike the colonial powers that had floated above the lineage system and used clan as an instrument for indirect rule…used it directly for divide and rule” (de Waal, 2018, p.18). In 1991, Gaalkacyo became a focal point of contention between the Hawiye and Darood militias. In 1993, clan delegates from the Somali Salvation Democratic Front (SSDF), the Somali National Alliance (SMA), and the Somali National Democratic Union (SNDU) signed the Mudug Peace Agreement, which divided the city and its main revenue sources between the Hawiye and Darood clans.

(4) Escalating tensions – Tensions between the two clans escalated again in 2016. Human Rights Watch notes that “On October 7, 2016, forces from Puntland, which controls the north of the town, and Galmudug, which controls the south, clashed in the Garsoor area where a ‘green line’ divides the two administrations.” An estimated 90,000 people were displaced as a result of the fighting during that month (UN News) and a ceasefire agreement was signed on 1 November 2016 in Abu Dhabi by the Puntland (Darood) and Galmudug (Hawiye) (Humanitarian Response).

(5) Recent insecurity – In May 2020, a suicide attack killed the governor of the Mudug region and three of his bodyguards while they were in Gaalkacyo, with al-Shabaab claiming responsibility (Al Jazeera). In December 2020, a suicide attack killed a number of people near a stadium in Gallkacyo in advance of an address by Prime Minister Mohamed Roble that was supposed to take place in the stadium (Human Rights Watch). Al-Shabab also claimed responsibility for this attack (VOA).

What are some recent examples of rumours and misinformation?

IDPs in Gaalkacyo have been the targets of rumours and misinformation. As The New Humanitarian wrote as far back as 2009, “Fear has gripped the IDPs in the past two weeks after mobs attacked them and their businesses over suspicions that they were involved in explosions in the town.”

More recently, there has been an increase in rumours and misinformation related to the COVID-19 pandemic. UNFPA notes that “a rapid diagnostic survey conducted by Africa’s Voices asked Somalis in selected states about their thoughts on COVID-19 in April [2020]. It found that one in ten respondents expressed thoughts on COVID-19 that involve rumour, stigma or misinformation.” Different groups are spreading misinformation about COVID-19 for their own political purposes, such as by Al-Shabaab, which controls parts of southern and central Somalia. As the BBC reported:

The al-Qaeda-linked al-Shabab group has warned Muslims to beware of infectious diseases such as coronavirus, which it says are spread “by the crusader forces who have invaded the country and the disbelieving countries that support them.”

Therefore, there is an urgent need to counter the spread of misinformation and disinformation, especially in the context of the pandemic, because of their potentially deadly consequences. As UNFPA points out, “[reliable] data can save lives in Somalia’s fight against COVID-19.”

What communications channels are most commonly used in Somalia?

Since the 1980s, Somalia has developed a number of media outlets, such as newspapers, radio stations, various TV channels and websites (Noragric Report, 2012). Professionally-run media outlets – particularly FM radio stations – are common, as are web news outlets (BBC News; Noragric Report, 2012). The country had approximately 1.2 million internet users in 2017, representing approximately 8% of the population (BBC News). The article notes that “Many listeners tune to Somali-language media based abroad, in particular, the BBC Somali service. Somali satellite channels are a significant part of the TV scene. Most of these are based in the UK.”

Social media is also expanding in the country. As Media Landscapes notes, “In recent years Facebook, Twitter, Instagram and YouTube have emerged as powerful social networks that Somalis at home and abroad have harnessed to discuss politics, culture and identity.” In Somalia, social media is accessed mostly through mobile phones rather than computers.

Despite the growing accessibility of various information channels, freedom of expression and freedom of the press are often violated. There have been recent calls for the Somali government to fulfil its responsibilities by “ending governmental violence against journalists and protecting the free speech of journalists and all citizens” (African Affairs Committee, The New York City Bar). This group called upon the Somali government to “cease its unwarranted arrests and detention of journalists, its attacks on journalists, and its arbitrary blocking of independent websites and shuttering of media stations.” Indeed, Reporters Without Borders pointed out that “Somalia continues to be one of the most dangerous countries in Africa for media personnel, with three more journalists killed in 2019, bringing the total killed in the past ten years to 50.”

Why is it important to counter misinformation in Gaalkacyo and where does the Sentinel Project fit in?

The abovementioned factors make Gaalkacyo a very appropriate environment for implementing a misinformation management program, which is why the Sentinel Project and the Manaal Relief Foundation (MRF) have launched Runtu Waa Nabad, which means Peace is Truth in Somali. Our hope in working with MRF is that Runtu Waa Nabad will foster a culture of misinformation literacy, lessening the possibility of rumours leading to violence.

Runtu Waa Nabad is a mobile phone-based information service that engages people in moderating rumours and misinformation in a similar manner as projects like Kijiji Cha Amani in the Democratic Republic of the Congo and Hagiga Wahid in South Sudan and Uganda. The key elements of Runtu Waa Nabad are:

Rumour reporting – Runtu Waa Nabad users can sign up and report rumours anonymously using our SMS system, the project website, or by contacting one of the project’s trained community ambassadors. Every rumour is different so we have to prioritize which ones to address first. We manage this process using the purpose-built WikiRumours software, with any reports concerning violence taking precedence.

Verification – Once we determine which rumours to address first, our next task is to uncover the truth. There are various ways to do this, and our team has to determine the best approach to use for each rumour. In some cases, the relevant authorities may know, while in other cases, consulting trusted sources within the community or querying subscribers may yield the truth.

Intervention – Finally, we need to not only verify rumours and respond to the individuals who initially reported them, but also to consider strategies for containing and countering false information on a community level before it can spread and do harm. This is where community partners such as chiefs, elders, youth leaders, and women’s representatives will be essential.

In addition to these elements, Runtu Waa Nabad’s community ambassadors play a key role by serving as the human face of the project. These trained volunteers assist with monitoring rumours in their communities as well as being conduits for delivering accurate information from Runtu Waa Nabad back to those same communities. Community ambassadors also act as proxies by reporting information on behalf of community members who are unable or unwilling to use technological channels to interact with Runtu Waa Nabad. This helps to maximize the project’s accessibility in an environment with a significant digital divide.

Keep checking back on our website and our social media channels to learn more about the progress we are making on this important project.