The 2022 Kenyan General Election: An Analysis of New and Enduring Violence Risk Factors 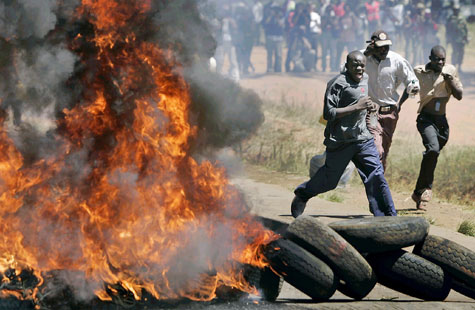 Kenya is set to hold a general election on 9 August 2022, which will see changes for all elected positions within the government, including members of parliament, senators, and the presidency. President Uhuru Kenyatta and Deputy President William Ruto currently disagree on a number of issues including when to start campaigning for the 2022 elections and whether to have a national referendum before the election. The ruling Jubilee Party is also being pulled in different directions, with many members openly supporting candidates from other parties. This situation, along with many other factors, puts the country in a fragile situation.

While democratic elections are usually promising, Kenya has developed a firmly established pattern of electoral violence since the rebirth of pluralist democratic politics (OHCHR, 2008). Despite once being seen as a beacon of peace in Africa, during the 1992, 1997, 2007, and 2017 general elections the country experienced violence that killed many people and displaced hundreds of thousands more. While conflict triggers are multi-dimensional and include historical, structural, institutional, legal, and cultural factors, they have always reflected tensions between ethnic identities. This is because the foundation of pluralistic democratic politics in the country was anchored on political party structures that originally segmented the country along ethnic lines.

For instance, the aftermath of the December 2007 contest led to months of heavy ethnopolitical violence that is estimated to have killed 1,200 people and forced more than 500,000 others to flee their homes (BBC, 2010). This violence primarily impacted multiethnic, low-income areas in Nairobi, Naivasha, Kisumu, and Mombasa. Beyond the direct victims of physical violence, there were also severe economic impacts, as VOA (2009) reported at the time, explaining that “The mayhem has had a major impact on the country’s economy which has been one of Africa’s strongest. Business leaders report huge losses and many predict that Kenya will be unable to meet projected growth targets.” This situation was exacerbated by skewed information about attacks, which was spread mainly by those who had fled the violence, thereby heightening intercommunal tensions and distrust (Personal observation notes from Sentinel Project staff member, 2008).

The subsequent general election in 2013 was relatively peaceful but ethnopolitical tensions continued to build up in most parts of the country, with Tana River County experiencing a series of massacres in late 2012 and early 2013 that killed over 170 people, wounded many more, and displaced tens of thousands (HRW, 2013). Simultaneously, distrust and anger continued to grow in the Rift Valley, Nyanza, and Nairobi due to the state’s failure to address the underlying causes of violence (HRW, 2013).

This situation laid the groundwork for violence following the 2017 general election as police and opposition supporters clashed violently, mainly in Nairobi and western Kenya, after the opposition leader Raila Odinga questioned the credibility of the results, successfully challenged them in a court case, and then refused to participate in the presidential election re-run (NYT, 2017). Civil society organizations and international non-governmental organizations, such as Human Rights Watch, raised concerns over grave violations of human rights as protests by opposition supporters were met with excessive use of force by the police, leading to the loss of many lives. It is also notable that social media platforms such as Facebook, which young Kenyans use extensively, were used by politicians to drive political intolerance as they promoted polarizing rhetoric (The Conversation, 2017).

A similar pattern of violence as that exhibited in the lead-up to the 2007 elections has cropped up today. Pockets of political intolerance and violence have been reported in Murang’a, Githurai, and Kisii (Personal observation notes from Sentinel Project staff member, 2021). These tensions are generally related to ongoing campaigns over the Building Bridges Initiative (BBI), which is a draft bill calling for a constitutional referendum (see below for details) in June 2021 before the general election in August 2022. The proposed referendum and the election together place Kenya in the midst of high-stakes political campaigns for the next 16 months.

This background is relevant when looking ahead to the 2022 election because many of the same underlying risk factors continue to be present while new exacerbating risk factors have now appeared. These include the following six considerations:

(1) Public expectations of violence – There seems to be a general expectation of violence in 2022. This expectation risks becoming a self-fulfilling prophecy if the state and various political actors do not address the many root causes of violence and reduce the high level of political polarization.

(2) Shifting political alliances and divisions – The ongoing presidential succession debate has created new alliances between former adversaries and enmity between former allies, particularly as the current deputy president, William Ruto, has become a dissenting voice against the current president. At the same time, traditional political rivals have been working to bridge their disagreements while established alliances have been breaking apart and threatening new ethnopolitical divisions.

(3) Exploitation of socioeconomic grievances – There are indications that 2022 may become a class-based contest along the lines of narratives about the “haves and have nots,” which are also known in Kenya as the “dynasties and hustlers” (Al Jazeera, 2019). Kenya’s widespread poverty, severe economic inequality, and long history of ethnically-biased development make such narratives especially appealing to many people with potentially incendiary effects.

(4) Prevalence of misinformation – There is an established precedent for rumours and misinformation (including disinformation that malicious actors deliberately spread) exacerbating political and intercommunal tensions in various countries. Kenya is a perfect example of such a country due to the high degree of digital connectivity among its population, especially youth who live in the regions most affected by ethnopolitical tensions. When combined with relatively low levels of digital literacy and limited access to reliable information sources, this situation is primed for misinformation and manipulation to incite violence during the election.

(5) Building Bridges Initiative and constitutional referendum – With just 20 months left in his term, President Uhuru Kenyatta intends to engineer major constitutional changes that will affect the structure of his successor’s government. The changes, contained in a constitutional draft bill known as the Building Bridges Initiative (BBI), are the result of a March 2018 peace deal between the president and opposition leader Raila Odinga. Major changes include introducing the positions of prime minister, two deputy prime ministers, and a leader of the official opposition while also expanding the legislature by adding 70 more parliamentary seats.

(6) COVID-19 impact – The COVID-19 pandemic has severely damaged major economic sectors, disrupted Kenyan society, and worsened the country’s debt burden. The economic and social disruptions induced by the pandemic have eroded progress in poverty reduction in Kenya, forcing an estimated two million more Kenyans into poverty. The economic fallout will almost certainly morph into an election issue as more Kenyans continue to be faced with the widening socioeconomic gaps in their society.

August 2022 is not as far off as it may seem. Preparing to ensure peace during the entire electoral process is an urgent matter. There is now an opportunity for a concerted effort by various actors to reduce the risk of violence in 2022 by putting in place peacebuilding initiatives at local levels. At the same time, stakeholders must still prepare for violent outcomes by building capacity and setting up mechanisms to support Kenyans in coping with violence if it does happen. Seizing this opportunity now requires rapid action by various actors to mobilize the necessary resources and start working as soon as possible.

In light of these considerations, the Sentinel Project is developing a new misinformation management project to support a peaceful election process in Kenya in 2022. We intend to implement this project by significantly scaling up Una Hakika in 15 counties across the country in order to prevent and mitigate violence. We will greatly expand our mobile phone-based information service to engage citizens in monitoring, verifying, and countering the spread of harmful rumours and misinformation that contribute to conflict. Una Hakika will also function as a localized early warning system in order to inform effective peacebuilding initiatives and to help people navigate potentially dangerous situations.

To support our newest project, please consider donating to the Sentinel Project here.