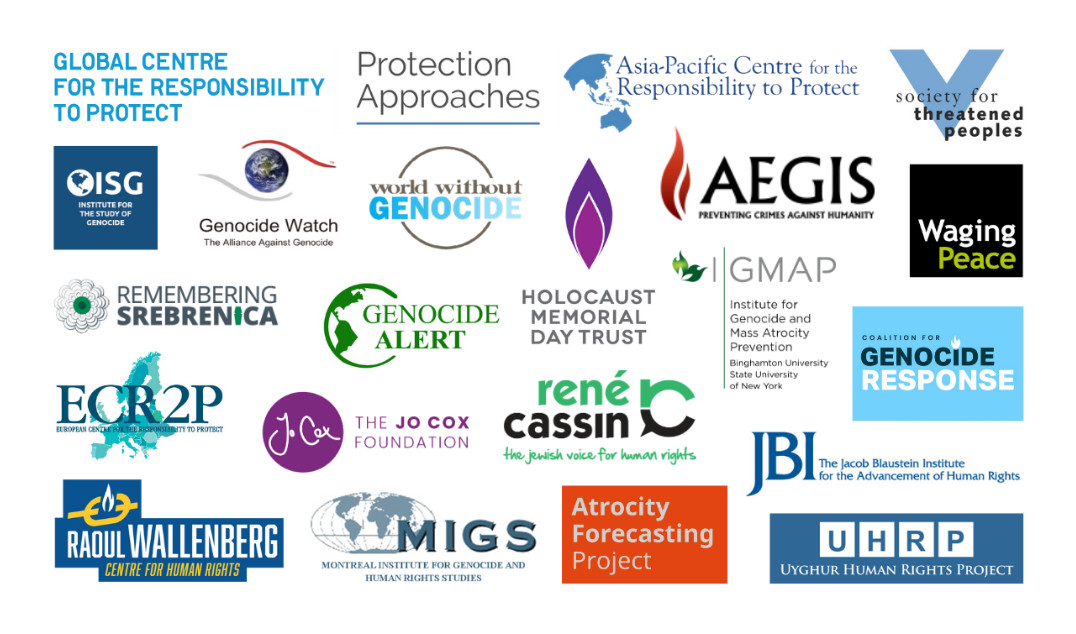 We, the undersigned human rights and genocide prevention organizations, and individual practitioners, are deeply concerned over mounting evidence that Chinese government policies targeting Uyghurs and other Turkic Muslim-majority peoples in the Xinjiang Uyghur Autonomous Region of China strongly suggests that crimes against humanity and genocide are taking place.

The international community has the responsibility to respond to these crimes and protect Uyghurs and other Turkic peoples through diplomatic, humanitarian and other peaceful means. The atrocities being perpetrated are no less egregious if they are found to constitute one international crime or another.

Under the guise of curbing religious and political extremism, the Chinese government has intensified widespread and systematic policies to repress Uyghurs and other Turkic peoples on the basis of their religious and ethnic identities. The atrocities include arbitrary detention of between 1 and 1.8 million people in internment camps, a widespread program of political indoctrination, enforced disappearances, destruction of cultural sites, forced labour, disproportionate rates of prison incarceration, and coercive birth prevention campaigns and policies.

UN human rights experts have raised serious concerns about “increasing practices of arbitrary detention, enforced disappearance, absence of judicial oversight and procedural safeguards within an increasingly securitized environment, particularly for designated minorities, notably Uyghurs” and that “these centers, due to their coercive character, amount to detention centers.”

Observers have referred to “a notable trend of enforced disappearances of Uyghurs,” the widespread destruction of Uyghur mosques, graveyards and other cultural sites, and the subjection of at least 80,000 Uyghurs to conditions that strongly indicate forced labour since 2017.

Most recently, reports have documented Chinese government policies intending to reduce birth rates among Uyghurs including involuntary abortions and sterilizations. In 2018, 80 percent of all IUD placements in China were performed on women in the Uyghur Region, despite the region making up only about 1.8 percent of China’s total population. The forced separation of an unknown number of Uyghur children from their parents has also been documented by human rights groups since 2018.

These measures meet the threshold of acts constitutive of genocide, core international crimes under the Genocide Convention, which prohibits “imposing measures intended to prevent births” among an ethnic or religious group. We also believe that the Chinese government may be perpetrating the following acts prohibited under the Genocide Convention: causing serious bodily or mental harm to members of the group, deliberately inflicting on the group conditions of life calculated to bring about its physical destruction in whole or in part, and forcibly transferring children of the group to another group.

These measures are also consistent with crimes against humanity, an international crime under the Rome Statute, including the persecution against an identifiable group on racial, ethnic, and religious grounds, forced population transfers, enforced disappearances, and deprivation of liberty in violation of international law.

Signatories of this letter urge states to:

1. Convene a special session at the UN Human Rights Council to appoint a Commission of Inquiry to investigate human rights violations taking place in the Uyghur Region and develop strategies to end these violations.

2. Implement commitments on atrocity and genocide prevention through bilateral and multilateral diplomacy efforts.

3. Independently investigate and make appropriate legal determinations regarding the treatment of Uyghurs and other Turkic Muslim-majority peoples in China.

It is our collective responsibility to protect populations from mass atrocities, including crimes against humanity and genocide. We must act now to prevent further atrocities against this long- persecuted group.