The Global Rohingya Diaspora – Lifelines to Bangladesh and Myanmar 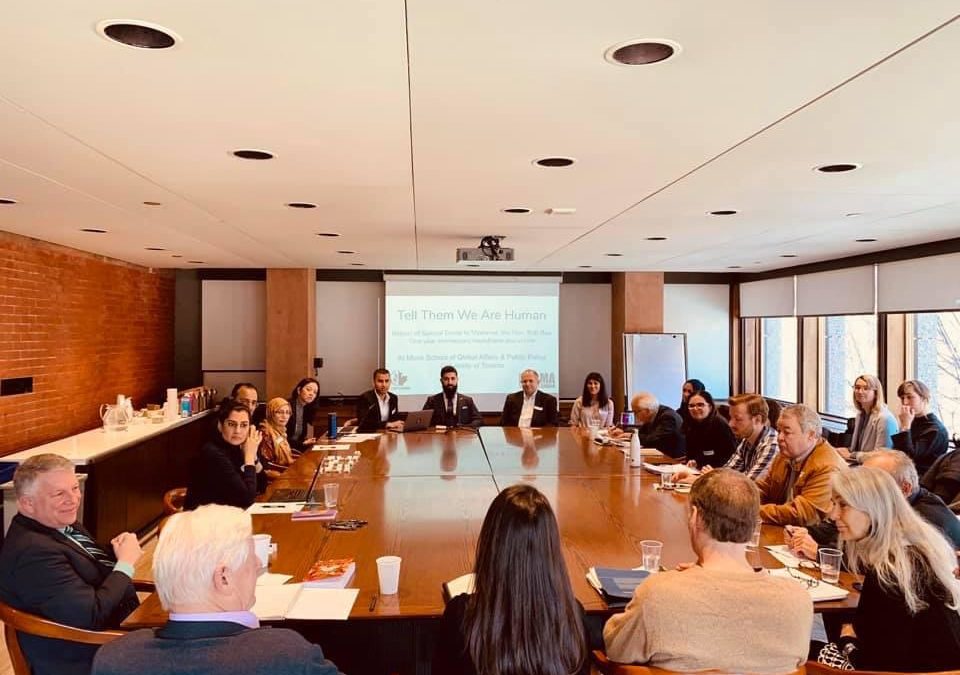 Diasporas can play a significant role – both positive and negative – in the development and politics of their countries of origin. For example, academic researchers have established that diasporas improve the lives of their home communities by maintaining cultural links, raising awareness, sharing information, and sending remittances to family and friends. However, diasporas are also often painted in an unfavourable manner because they might exacerbate or even escalate conflict in their homelands from abroad.

The Rohingya are indigenous people from Rakhine State in northwestern Myanmar, where they previously lived in the townships of Buthidaung, Maungdaw, and Rathedaung (Zarni & Cowley, 2014). Since 1962 – the outset of General Ne Win’s military dictatorship – the Rohingya people have been the target of increased institutionalized, systemic discrimination (Zarni & Cowley, 2014). In 1978, a large-scale, violent operation was orchestrated by the government against the Rohingya in order to legitimize the claims of some other ethnic groups to the land of the Burmese state. At this time, the first large exodus of approximately 200,000 Rohingya crossed into Bangladesh. Since 1982, Myanmar officially stopped recognizing the Rohingya as one of the country’s 135 official ethnic groups, as a new law barred them from eligibility for citizenship (Zarni & Cowley, 2014). The violence between the state and minority groups, including Rohingyas, has endured since that time. Although the democratization process ostensibly began in 2011, that time also saw the beginning of renewed violence between the military and ethnoreligious minority groups. The Independent International Fact-Finding Mission on Myanmar (IIFFMM) stated in its 2018 report that “the violence, particularly the ‘Rohingya crisis,’ has been used by the military to reaffirm itself as the protector of a nation under threat and to cement its political role further.”

In the most recent escalation of violence, on 25 August 2017, the Arakan Rohingya Salvation Army (a small insurgent group also known as ARSA) attacked military bases and security force outposts across Rakhine State. The military retaliated by conducting “clearance operations” using wildly disproportionate levels of force. The IIFFMM report stated that “the operations targeted and terrorized the entire Rohingya population… As a result, by mid-August 2018, nearly 725,000 Rohingya had fled to Bangladesh.” The IIFFMM report concludes that “Myanmar’s commander-in-chief, Senior General Min Aung Hlaing, and his top military leaders should be investigated and prosecuted for genocide, crimes against humanity, and war crimes.” The Canadian House of Commons endorsed the findings of the IIFFMM report on 20 September 2018 through a unanimous vote by all parties.

As a result of the decades-long violence, most of the surviving Rohingya have left Myanmar and now live in the diaspora with the largest population located in refugee camps just across the border in Cox’s Bazaar, Bangladesh. Other Rohingya diaspora communities are dispersed around the world in countries such as Canada, Ireland, Saudi Arabia, Australia, the United Kingdom, and the United States.

In 2006, Canada became the first country to resettle Rohingya refugees from Cox’s Bazaar refugee camps through the United Nations High Commissioner for Refugees (UNHCR) referral process. Between 2006 and 2010, the Canadian government brought in hundreds of refugees through the Government-Assisted Refugees (GAR) program, and a number of Rohingya newcomers settled in the Kitchener-Waterloo region of Ontario. The Rohingya community in Canada soon established a number of organizations that participate in advocacy, awareness building, and lobbying the Canadian government (and the broader international community) to acknowledge the Burmese government’s genocide against Rohingyas well as to address the humanitarian crisis in Bangladesh.

Over the past decade, these members of the Rohingya diaspora have advocated tirelessly for the Canadian government to endorse the findings of the IIFFMM report, which the House of Commons unanimously voted in favour of on 20 September 2018. The Senate approved the motion on 2 October 2018. The Government of Canada has further committed $300,000,000 over the next three years to respond to the situation in the refugee camps and to work towards a political solution in Myanmar. The Canadian government also took the symbolic measure of revoking the honorary Canadian citizenship of Myanmar’s de facto leader, Aung San Suu Kyi. Advocates are currently supporting a motion led by Senator Marilou McPhedran calling for the government to invoke the United Nations Genocide Convention against Myanmar for the ongoing violence and to pursue a case before the International Court of Justice.

I spoke with a researcher based in Cox’s Bazaar about the role that the Rohingya diaspora can play in mitigating the refugee crisis in Bangladesh and resolving the conflict in Myanmar. He explained that “the diaspora have a particular set of skills, such as good education, an understanding of the geopolitics, and how international accountability and advocacy work. When we speak to people in power, we usually try to bring along those in the diaspora who can travel. We want to have the broadest range of actors that we can draw from, but a lot of Rohingya can’t travel… In Canada, in the UK, those people have met with more politicians than we have. They know the lay of the land more than we do.”

He further noted that “the diaspora are feeding in capacity, resources, time into the camps. For example, the global diaspora members that are part of the coalition in Western countries fed money into the protests around the Genocide Anniversary. The human capital is in the camps. They are the ones who organize and protest. The financial capital is outside. Different groups are feeding in funding, time, and resources and human capital into starting youth programs, education centres, etc. You have members of the diaspora go back to the camps for schools, medical supplies. If anything, they shifted everything into gear. They fill the gaps that we can’t fill, that the NGO industrial complex can’t fulfill.”

Members of the Rohingya diaspora in Canada are keen to participate in resolving the crisis on their own terms. One young activist told me that “several hundred Rohingya now call Canada home, but the oceans between do little to distance us from the suffering of family and friends. They only add to the sense of responsibility to speak up, to act, and to hope.”

He continued his point that “the Rohingya community is growing [in Kitchener-Waterloo]. It is large and robust. [Rohingya are] learning English, finding jobs, [in a] peaceful and stable country. Their children are doing better, getting their first jobs, succeeding. Everyone believes that Canada will do good… And our government [is receptive]. Even though we have a small community here, our government responded more than everyone. We have 50,000 people in the United States, 2,000 to 3,000 people in the United Kingdom; they are working so hard, but their governments aren’t listening… Rohingya are Canadian. We have worked hard as Canadians… and the government listened.”

The Canadian Rohingya diaspora regularly convenes international meetings, public awareness-raising events, and academic seminars about the genocide in Myanmar. For example, in February 2019, several Rohingya activists from Canada presented at the International Conference on Protection and Accountability in Burma at Barnard College, Columbia University. In March 2019, Ahmed Ullah, a Rohingya activist from Kitchener-Waterloo spoke at the widely attended Global Education and Skills Forum in Dubai, United Arab Emirates. In April 2019, the Canadian Rohingya Development Initiative (CRDI) and Burma Task Force (BTF) convened a round-table discussion with the Honourable Bob Rae, Special Envoy to Myanmar, along with lawyers, academics, activists, and representatives from NGOs to discuss the progress made in the year since Rae’s report was released. 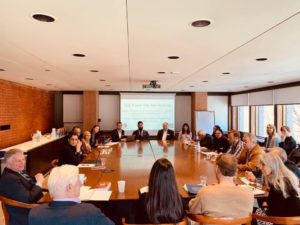 Members of the Rohingya helped to organize an event for activists, researchers, and humanitarian aid workers at the University of Toronto on 17 April 2019 to discuss the Rohingya crisis.

Members of the Rohingya diaspora in other countries are hopeful about the role that they can play in the resolution of their country’s issues. In another example, Tun Khin, president of the Burmese Rohingya Organisation in the United Kingdom, was successful in convincing executives at Twitter to remove the account of Myanmar’s military commander, Min Aung Hlaing in May 2019. This move is significant because, as mentioned above, the IIFFMM report had designated him as an alleged perpetrator of the aforementioned crimes under international law and highlighted his use of social media to these ends.

On the topic of gender-based violence perpetrated by the Myanmar military, a Rohingya woman from Germany explained to me that “the Rohingya in exodus are trying their best, especially when their countries are leading. For example, rape victims – it is a brave thing for them to come to the front line. When I say the front line, I mean that their families are at risk if they come forward. They provide strong evidence of ongoing genocide. So when this happens [when they come forward], they are so brave.”

The Rohingya diaspora is further encouraged by the resilience of their youth and is confident about the role that they will play in the future. Another Rohingya woman from Germany stated that “I believe in some years, the youth will make a big difference to our cause. The youth are coming up but they are still developing… There are very brilliant minds studying in different countries. Hopefully, they will create big changes. We are optimistic.”

The same Rohingya man from Canada, on the topic of youth, highlighted that “What we are trying to achieve will not happen overnight but will require hard work, commitment, and perseverance. We look to the Rohingya genocide victims, particularly the youth, as our role models. They show resilience and courage in the face of this devastating situation. We owe them the possibility to make a vibrant community. The youth who are studying here will have good leadership skills, they can be leaders of Canadian society. Not just in Canada, but around the world.”

The global Rohingya diaspora will continue to make positive strides towards peace in Myanmar. Equipped with the right capacity, knowledge, and skills, they are poised to be influential against the genocidal regime that seeks to erase their people. They will continue to be engaged even when the international community moves on to the next crisis, when governments change winds, and when the news cycle has forgotten their cause. Those remaining in the camps and in Myanmar need all of the support they can get from their friends and families around the world.

Yuriko Cowper-Smith is a PhD candidate in Political Science (with a major in Comparative Politics and a minor in Public Policy) in the Department of Political Science at the University of Guelph. Her main research interests lie in migration, social movements, and civic and political engagement. Her dissertation research investigates migrant political activism with an empirical focus on the Rohingya community in Ontario, Canada. Yuriko’s research has been supported by an Ontario Graduate Fellowship, and an Ontario Graduate Scholarship. She has joined the Sentinel Project team as our Myanmar analyst, bringing an important research perspective to our work in the country.

Bermudez, A. (2010). The transnational political practices of Colombians in Spain and the United Kingdom: Politics ‘here’ and ‘there.’ Ethnic and Racial Studies, 33(1), 75-91.

Levitt, P. (1997). Transnationalizing Community Development: The Case of Migration Between Boston and the Dominican Republic. Nonprofit and Voluntary Sector Quarterly, 26(4).