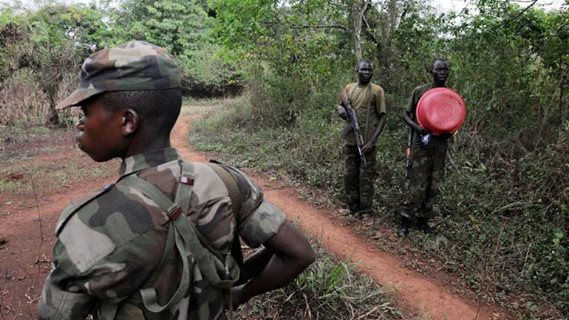 The Kijiji Cha Amani project’s community ambassadors face the risk of kidnap and violence while striving to reconcile communities in the Democratic Republic of the Congo. Rumours, so-called “fake news,” and scarce reliable information have created confusion and mistrust in the region, driving violence between various factions and human rights abuses against civilians.

Kijiji Cha Amani (Swahili for “Peace Village”) ambassadors try to avert these atrocities by ensuring that communities receive access to accurate and impartial information. However, there are numerous challenges facing these volunteers themselves in their quest to reduce tensions. James Kataliko, the coordinator of Kijiji Cha Amani, explains that ambassadors are often suspected of being informants or working for warring factions by members of the multiple armed groups that operate in the country and the repercussions can be terrible.

In the Beni Territory of Congo’s North Kivu Provine there are almost daily clashes between the national army (FARDC) and the rebels of the Allied Democratic Forces of Uganda (ADF). James recounts that “One of our community ambassadors was arrested by the Intelligence Service Manager claiming that his SMS [text messages] were under surveillance. This agent wanted to know why he was sending security information and what Kijiji Cha Amani is actually doing in North Kivu. After a two hour interview, they released him with no action being taken.”

In another example from February 2018, an ambassador in Nyamilima, 40 kilometres from Kiwanja, was approached by two men dressed in civilian clothing and taken to a group of six others armed with rifles and machetes after attending a meeting to advocate peace. His phone was taken and he was forced to walk 2 kilometres into the nearby national park while carrying supplies for them. The group then told him “Tunabajuwa nyiye bote, weye tena uende sema urituona uku, uende ambiya bare basoda yenu.” This roughly translates to “We know you all, go back to your soldiers’ quarters and say that you were here. Go.”

The ambassadors described so far were some of the luckier ones. Community ambassador Fiston Matsande’s house was shelled in the crossfire between the FARDC and the Maimai rebel group. Thankfully, Fiston and his family were not home at the time but their house has now been taken over by a third military group.

Meanwhile, James says that “another community ambassador in North Kivu, a Hutu from the Bwito district of Rutshuru, has a hard time living with his family because he often organizes sessions on peace and peaceful cohabitation with other Kibirizi ambassadors who are not of his ethnic group. His family members fear that he is suspected of being a traitor in the community and this could cost him his life.”

According to James, these incidents and many others have been caused by the fact that there are more than 15 military groups operating in the country, coupled with communications and technology issues. “The problems that we are currently experiencing are mostly related to the lack of communication tools such as quality phones, having phone credit to gather and share trustworthy information, and means of transportation to verify events.”