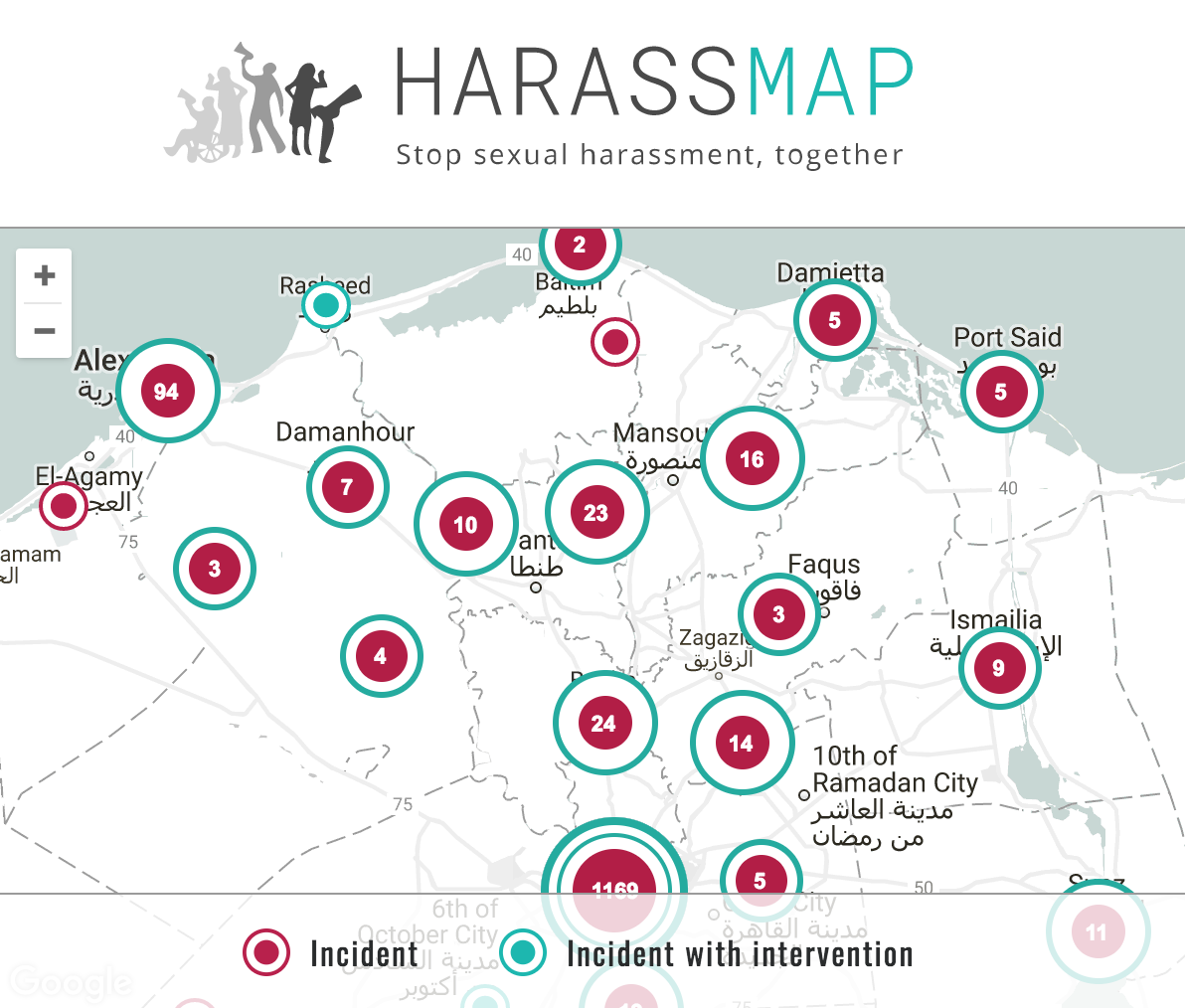 Sexual harassment exists everywhere in the world, but so does the determination to end it. HarassMap is an award-winning initiative in Egypt based on the idea that if more people start taking action when sexual harassment happens in their presence, we can end this epidemic together.

HarassMap uses the reports generated to work with institutions and individuals and convince and support them to create consequences for perpetrators of sexual harassment and put an end to stereotypes that blame the harassed. The team also works with universities, workplaces, shops, restaurants, etc. and supports them in implementing a zero-tolerance policy against sexual harassment in their space. This challenging of social norms calls for a critical mass of bystanders and the wider community to take a stand and get involved. As more and more people speak up to the behaviour, HarassMap believes harassers will think twice before harassing, and in the long run, this will decrease sexual harassment in the country. The groundwork in Egypt is only the beginning – HarassMap and the Sentinel Project envision a system which tracks sexual harassment globally.

What impact does the recent #MeToo movement have on HarassMap’s work?

Tim: #MeToo, #GamerGate, Roger Ailes, James Damore and Travis Kalanick are all evidence that sexual harassment isn’t a problem limited to certain countries. It’s a continuing, under-addressed global problem. One of the fundamental ideas behind rebuilding HarassMap was to allow the platform to expand beyond Egypt and be run simultaneously in any community anywhere in the world, without requiring other organizations to hire technical staff or install software or pay for servers. The new HarassMap platform has a system we call “domain aliasing”, which The Sentinel Project initially developed to replicate its work in southern Kenya. Any organization with a domain name can point that domain at HarassMap and, with a bit of configuration by technical staff at HarassMap, provide full functionality to its community for free: incident reporting, intervention tracking, moderated commenting, expressions of support, etc.

How does HarassMap support victims of sexual harassment and assault once an incident has been reported?

Noora: We (HarassMap in Egypt) provide the “reporter” (the person who submits a report) information about how and where to access free legal and psychological/medical advice and support. Anyone can report – the person who experienced sexual harassment or assault as well as witnesses.

I think it is important to emphasise that the main purpose of the reporting tool is to:

The new tool also allows users to interact with the aggregated data in a new way (interactive visuals that complement the map). We wanted to make it a tool for inspiring and motivating people – so we have added options to comment on reports, express support, and more easily share reports on social media.

How does the system reinforce consequences for harassers?

Tim: HarassMap follows Justice Brandeis’s advice about sunlight being the best disinfectant. Even if harassment occurs anonymously (in a crowd or among strangers) or in secret (protected by influence and power), anonymized mapping of incidents can allow communities to understand the impact of sexual harassment in their region, and can spur individuals and governments to act. It’s obviously extremely difficult to counteract a hidden negative behavior, so HarassMap is intended to help expose and quantify the degree to which sexual harassment is affecting communities.

How can people outside of Egypt apply a similar system in their own country?

Tim: Any community, neighborhood, municipality, region or country can benefit from the use of HarassMap, which requires no software, no technical support, and only minimal initial coordination with HarassMap’s setup team. There’s literally no risk or investment required to start tracking sexual harassment in a given region.

It’s also worth mentioning that HarassMap offers an open API for researchers to extract anonymized raw data. Open access to data, rather than just manually collated analysis, has always been a philosophical cornerstone of software built or supported by the Sentinel Project, and we continue to strongly encourage government bodies, NGOs, and academic institutions to adopt this model rather than clinging to antiquated, protectionist data policies.

To learn more about HarassMap, Hatebase, WikiRumours or other innovative technology platforms we work on at The Sentinel Project