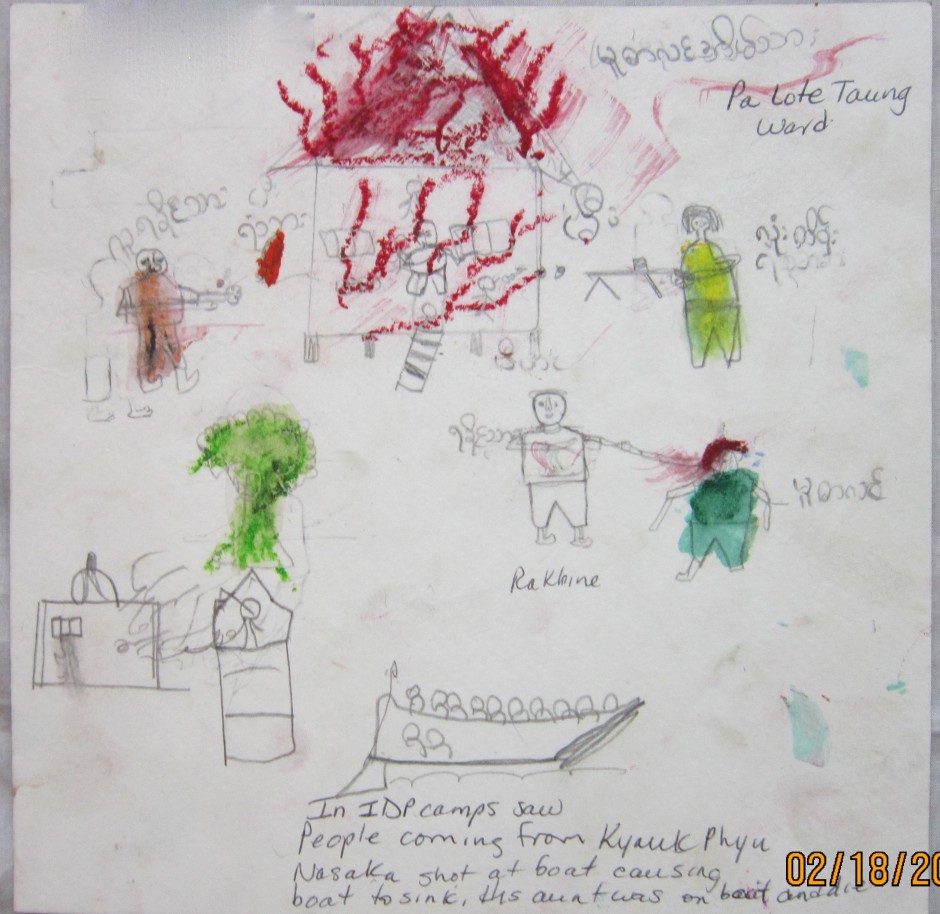 A drawing by a 12 year old boy from Pa Lote Taung Ward shows soldiers shooting at boats full of Rohingya, all of whom died.

The past month has illustrated the continuance of grave violations of human rights in Burma’s Rakhine State, as seen here on ThreatWiki. The Sentinel Project’s geospatial mapping database recorded appallingly common occurances of violent crimes comitted by government agencies against the Rohingya, many of which are concentrated in the border municipality of Maung Daw. A border clash which left an estimated 36 Rohingya dead came only days before Burma’s Border Service was accused of opening fire on Bengladeshi Border Troops, killing 1 Bengladeshi agent. Whether the recent bouts of gunfire are related to a rise in extreme Muslim militant groups in retaliation for the concentration-camp-like conditions of Rohingya communities remains unclear.

May 2014 also marked the renewal of US-imposed sanctions against Burma amid fears that the human rights situation in Rakhine State and the continued violence against other minorities may be derailing reform. A Sentinel Project contributor and medical doctor, Nora Rowley, testified this month to United States Congress on the Burmese government’s involvement in human trafficking and other crimes against humanity targeting the Rohingya. Rowley’s testimony followed a Sentinel Project report compiled in April for an international conference at the London School of Economics which found that nearly 70% of actions against the Muslim minority involved differing degrees of involvement by government organizations.

What You Can Do:

Concerns of genocide are legitimate and growing. A May 19 article in the New York Times referenced the Sentinel Project Burma Team’s research, which substantiated allegations of a policy of ethnic cleansing. This month, the Sentinel Project is deploying a Rapid Reaction Team from its current operations centre in Kenya to Burma with an aim of developing  a role for technology to play in preventing further acts of violence and reversing governmental and extreme nationalist organization’s progressions toward dire measures. The Sentinel Project is currently raising funds via Indiegogo for this important mission. We ask that our local and international network support us in our efforts as we attempt to replicate our success in Kenya on the ground in Burma.