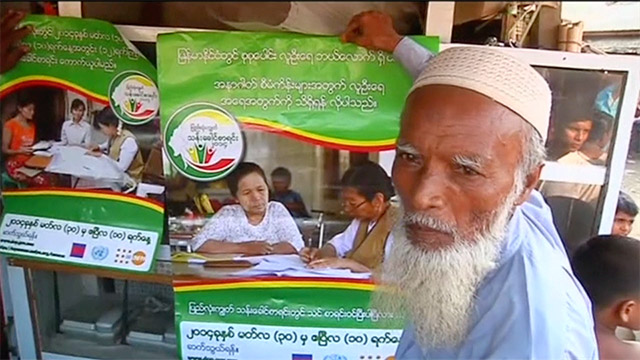 March saw more flare-ups of violence and attacks directed toward the Rohingya. On March 10, 113 homes in Maungdaw Township were burned down, leaving over 300 people homeless. Though this has happened in the past, villagers reported that these fires were different. They spread more quickly than in the past, and they suspect that chemicals were used for this purpose. In spite of the evidence that the fires were started by Rakhines, five Rohingya women were arrested shortly after. The police harassed them, and according to some reports burned their genitals with candles. They were sent to the hospital for treatment, and are now in the custody of the police.

Earlier this month, the government released their final report on the mass killings in Duu Chee Yar Tan village, Maungdaw Township, in January, strongly denying that any violence took place. Though the comission did acknowledge that a conflict may have occurred between villagers and security force, they claimed that there was no evidence that this was the fault of the security force, nor was there any evidence that anyone had been killed. This ran contrary to what UN Human Rights Rapporteur Tomás Ojea Quintana said as he received reports from locals that “100 policemen with live ammunition” carried out the violence, including the brutal killing of men, women, and children, sexual violence, and the looting and burning of properties. Much of the report also condemned the UN and Médecins Sans Frontières, both of which had made statements saying that the violence did occur. The Burmese comission’s report recommends that the government keep tight control on the operations of NGOs in the area, and that strong measures need to be taken to counter the “false allegations” made by the media. This denial and cover-up exemplifies the government’s stance on what is happening to the Rohingya, as well as the organizations trying to help them. Médecins Sans Frontières was ordered to cease operations in Rakhine State shortly after the commission finished their investigation. According to an interview with an ex-humanitarian worker conducted by the Sentinel Project in late March, MSF was removed because they refused to keep silent: “All international agencies and NGOs operate with the understanding that they play by the ruling party’s rules or risk expulsion.”

More attention has been attracted to Rohingya persecution at least in part due to an early-March BBC report that detailed World War II-like Ghettos in Aung Mingala, Sittwe. Yet although there has been an increased awareness on the plight of the Rohingya, this has not necessarily meant that their situation is improving. In previous months, it was discovered that human traffickers were holding many Rohingya captive in jungle prisons in Thailand, where they would be beaten and tortured until their relatives paid a ransom for their freedom. Thai authorities have been cracking down to empty the prisons, as well as to remove the Rohingya from the country due to overcrowding of holding camps. Traffickers are now using northern Malaysia as their destination for imprisonment. Rohingya are being held in small houses, so crowded that they are often not able to lie down. Despite the Malaysian government’s current public stance against illegal immigration, the traffickers are allegedly bribing border officials in order to bring the Rohingya in. One victim who was able to escape reported that the traffickers are often Rohingya themselves. The relocation to Malaysia indicates that trafficking of the Rohingya will likely not cease until their desperate situation changes.

As well, Rohingya refugees face violence in IDP camps abroad. On March 13, a family of 4 were beaten, publicly embarrassed, and forcibly transferred out of Nayapara refugee camp in Bangladesh, to another camp in the country. Mohammad Zaber was a teacher within the camp and taught about 30 students to support his family. In February, his school was burnt down, and no action was ever taken even after he filed a report with the UNHCR and the head of the camp. The newly appointed head of camp entered Zaber’s home with a group of border guards and police, and took him and his family to another camp at gunpoint. His 80-year-old father was also beaten, forced to climb a tree, and then forced to drink his own urine after he asked if he could have some water. Zaber was allegedly targeted because he had prevented the activities of local gamblers and robbers. Rohingya refugees are typically told, “This is not your country, you cannot do as you wish” after they experience violence in Bangladesh.

Most notably, Burma’s first national census in three decades began on March 30. In the days leading up to it, there were protests against allowing people to enter Rohingya as their ethnicity, as opposed to “Bengali,” the pejorative term used to describe the Rohingya, also implying that they are not really Burmese. Rakhine protesters said that they would also be boycotting the census if Rohingya was accepted. At least 15 offices, houses, and warehouses of NGOs were attacked and vandalized by Rakhine mobs on the night of March 26. The protests in Rakhine State’s capital, Sittwe had to be broken up by police after the crowd started attacking the offices of Malteser International, an NGO focused on humanitarian aid and health care. The staff had to be evacuated from their private residences and the field as well, and are currently waiting to be flown out to the Malteser Rangoon office. The crowd was particularly angry with one worker, who apparently took down a Buddhist flag in a way that was disrespectful to the religion.

At the last minute, the government announced that no one would be allowed to register as Rohingya on the census. Burmese officials say that they must call themselves “Bengali,” or else they cannot register on the census. Two negative outcomes have resulted from this decision. First, Burma’s decision goes against a promise that was made to the United Nations Population Fund, as Burma promised it would carry out the census in accordance with international standards, which allow all participants to self-identify ethnicity. If, alternately, Rohingya do choose to call themselves “Bengali,” this will act as a legitimization to the government and the rest of the country that there is no Rohingya ethnic group and that they really are foreign elements. A prime concern is that if they do not register at all, there will be no official record of the magnitude of the population, further muddying the waters in terms of extermination and forced-relocation. Either way, the central government will be able to use the census to legitimize aspects of local and national propaganda against the Rohingya.