The Business of Extermination – Making "a Killing" from Genocide in Burma 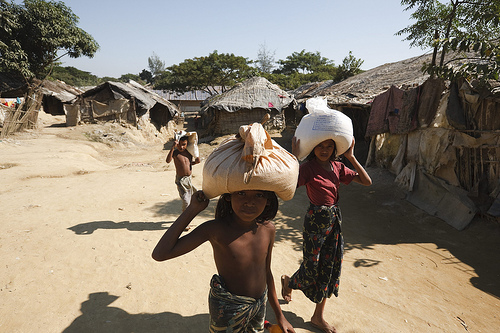 The Industry of Suffering

December 2013 has seen the continued exodus of Rohingya Muslims by boat to foreign lands – a yearly endeavor on the calmer waters of the season in the Bay of Bengal and Andaman Sea. The journey, often by dubious ocean-going vessel, is risked by many desperate people in hopes of salvaging their own lives and perhaps, someday, building a more stable and peaceful existence for their children.

The Rohingya are being forced out of Rakhine State and greater Burma by widespread and systematic persecution by government and government-tolerated or backed movements seeking to cleanse Burma of impure blood (dark-skinned “kalars”) and the religion of Islam. Perhaps more tragically, they are being pushed into the arms of those who are looking to transform an attempt to exterminate or displace a people into a lucrative business venture.

The past month illustrated that genocide, far from being a purely ideological endeavor, is a highly profitable activity as well. The benefactors of anti-Rohingya persecution in Burma have been manifold: security forces and police have arrested and extorted Rohingya; entire neighborhoods have been razed and seized for resettlement; Rohingya houses have been expropriated and re-sold, and their individual possessions looted and liquidated. It has long been a lucrative business for human traffickers to offer Rohingya reprieve from the daily violence, deprivation of rights, and poverty of Burma by offering a costly voyage to friendlier shores, but this month it was revealed that Thailand was deeply involved in the balance-sheets of ethnic extermination.

The Thai government’s covert policy, known as “Option 2,” involved an official practice of selling Rohingya refugees to human traffickers who then transport the victims to a string of jungle “gulag” camps in southern Thailand, near the Malaysian border. Money is made by selling the Rohingya as manual labor for a price relative to their skills or extorting their friends and family at home for ransom payments. The Thai federal police are not investigating the system of hard labor camps, a network of holding-areas some analysts have compared to Soviet labor and Nazi concentration camps, for reasons not explained to Reuters when the story broke on December 4 [1].

How Profitable is Genocide?

While it is difficult to guess at the value of an illicit industry, the United Nations estimates the value of one aspect, namely human trafficking, at about $9.7 Billion US Dollars in profit alone per year  in Asia and the Pacific – over 30% of the global industry [2]. This is only one facet of genocide and ethnic cleansing in Burma. The persistent extortion and expropriation of Rohingya in Burma would only add to the profits of human trafficking and the beneficiaries of the constant arrests and ransoms, each one bringing in millions of Burmese Kyats (thousands of US Dollars) are the local police and security forces. There is also a larger and much more profitable organization benefiting from the ongoing instability in Burma – the Burmese military and quasi-civilian government. As long as the Rohingya are a source of instability, along with the other ethnic minorities at war with the central government, the military is assured of its highly disproportionate $2.4 billion (likely more) dollar per year enterprise. All aspects and facets considered, genocide in Burma is a sizable part of a $12 billion plus dollar industry.

The profitability of genocide is not a new phenomenon; the business has historical precedents: a 2010 study conducted by the German Finance Ministry found that as much as one third of the German war effort was funded by Jewish property seized and taxed by the Nazi regime [3]. According to the study, the genocide of European Jewry was responsible for diverting some 120 billion Reichsmarks, approximately $20 billion US dollars today, into the coffers of the Reich Finance Minsitry and toward German conquest of Europe.