I wrote about a series of events, witnessing the universal father-son bonds and the impact when they were lost by deadly attacks upon Rohingya Muslims in Rakhine.

A bearded man and little boy with the same eyes share a yoghurt drink on a bench in downtown Yangon, Myanmar. When they finish, they walk away, the father’s flowing large white cotton tunic connected to his son’s small orange knit shirt by entangled fingers. Observing this touching scene sent an ache through my soul for the numberless Rohingya fathers and sons ripped apart by anti-Muslim violence, which has accelerated since its most recent explosive outbreak in June 2012 and spread beyond Myanmar borders.

It reminded me of the fatherless boys I have worked with as part of my volunteering work with the Rohingya Muslim ethnic minority in Sittwe Township, Rakhine State, Myanmar. I asked them their favorite memory of time spent with their departed fathers.  I noted down:  “He would take me to the snack shop”; “He always bought me my favorite white wafer snacks”; “He would let me keep the pocket change.”

These particular memories were shared with me as a part of visual storytelling sessions I oversaw, in which displaced Rohingya children aged between 8 and 18 years old conveyed, through the medium of art, why they had to leave their homes during the “Rakhine State Crisis”, i.e. ethnic cleansing of Rohingya, since June 2012.

Kamal, one older boy of 13, described how his father escaped death multiple times when ethnically Rakhine and security forces attacked their Pauk Taw village, house and then the boat they tried to escape in.  After they safely reached the township of Sittwe, his father was killed when he went back to their Pauk Taw ward to collect their legal documents and belongings. The emotional and physical pain of this ordeal from 4 months earlier was still visibly taking its toll on the young narrator.  When Kamal remembers his father it is painful.  I asked him to recall his favorite memory of his father in order to counter the searing pain of loss he experiences when he mentions him.  No one could take away that loving memory of their father-son bond.

This was the first time Kamal and many of the children had told their personal account of the mass trauma they carried within them; an invisible burden that haunts many Rohingya and other Muslims throughout Myanmar and places of attempted refuge.

As Rokima, one sweet 11 year old girl, narrated the story behind her drawing (below), I realized I had spoken to Abdul, her father, one month before. 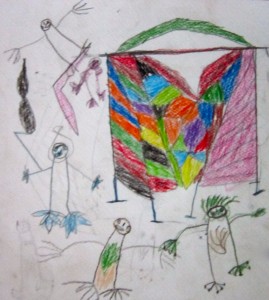 They both mentioned, with fondness, how handsome their 14 year-old brother and son was. Abdul had recounted every agonizing detail of his son’s death.  June 12, Abdul’s 14 year-old son went across the road to an ethnically Rakhine man’s betal shop, betal is a nut used like chewing tobacco. Immediately local Rakhine surrounded his son and started dragging him toward an approaching mob of Rakhine strangers.  Abdul and others tried in vain to get his son back.   Police came and stood between the two groups, further separating the desperate father from his captive son. Then the crowd dragged his son away.

Two days later Abdul was told that his son had been killed.   Photos had been taken and paraded around the town showing his son posed holding matches and petrol as “evidence” that he was going to kill ethnic Rakhine.  June 19, Abdul’s son’s body was found by the river.  Rokima drew his black stick figure body next to a pink river.   She described that his body was found in 2 rice bags sewn at the middle and with stones tied to the outside.  Abdul, drawn in pink, identified his son’s body and recalled the evidence of trauma included his penis was cut off and all his teeth were knocked out.  Abdul said that NaSaKa, border security, refused moving his son’s body for burial.  Rokima drew the policeman, in blue, who pointed a black gun at her father when he tried to take his son’s body from the riverside for burial.  Both father and sister attended his riverbank funeral and burial.

Since that day, this father’s whole world has changed.  Abdul cannot eat or sleep. He finds no pleasure in life.   His son was his fifth child out of seven.  Everytime he sees a boy his son’s age he feels sick inside.  He cannot see a Rakhine without feeling the pain of betrayal of once friendly neighbors who kidnapped his son leading to his mutilation and death.

It took another three months of escalating violence around them before the family escaped their Pauk Taw ward. Rokima described, like several other children, fleeing by river toward Sittwe but being stopped by the Myanmar Navy. Her family was detained in their boat without food or drinking water for 3-4 days. She recalls her two month old brother crying continually.   After being released by the Navy, the military denied safer river docking at Sittwe and they were forced to approach by sea.  When the waves were big, the boat shook and her baby brother fell into the sea and drowned.

The deep traumatization of the father of that family, like that of countless other Rohingyas, continues to build as government and security officials make decisions that further endanger Rohingya and other Muslims’ lives. Furthermore, many feel increasingly affronted and hopeless when they see the national and international media characterize- in terms that they do not recognize- the violence in which they have suffered so much. Many portray the recent bloodshed in terms of “inter-communal” unrest as opposed to the outright unilateral attack that they experienced; in some cases the Rohingya have been portrayed as predatory aggressors, whereas their Rakhine attackers, including their antagonists from within the Buddhist clerical classes and within the police and military roam freely, while the complicit central government is lauded for its human rights reforms.

Rohingya Muslim fathers have been portrayed nationally and internationally as angry illegal immigrants, intent to spread Islam by take-over and mass conversion by marriage, rape and violence.

For decades, this grossly contrary representation has been used to rationalize military government and now local Rakhine brutality against Rohingya.  Thus the Rohingya’s burden of trauma is not new, but cumulative.

Meanwhile, Rohingya’s life-focus remains family-oriented regarding shelter, food, education, health and happiness.   Abdul’s focus is no less the same, but so much more difficult with the still open wound from his son’ deliberate killing, denial of IDP status and regular food rations, the upcoming rainy season that promises makeshift shelter destruction and increased illness.  Abdul and other violently displaced Rohingya Fathers, who have been injudiciously denied IDP status, further despair as mass anti-Muslim violence spreads to central Myanmar and threatens further trauma in Rakhine State.

Another case illustrates Rohingya’s humanity, which should be celebrated rather than denied. Four boys, Mohamed Islam, Soyid, Mohamed Nuru and Shawbir, ages 8-12 years-old, the last two of them brothers, told the story together of how their fathers went out together to find food after they were blockaded in their village mosque with only grass to eat. Their fathers were killed together bringing them food. 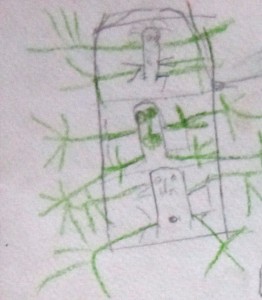 Another Rohingya drew the fathers, who were killed, in the boat. Drawing 2

Meanwhile, I had met the two brothers, Mohamed Nuru 10 and Shawbir 9, out of the four boys, with their family one month beforehand.  Fatima, the widow and mother of 5 children 6 to 12 years old applied and was denied IDP status and relief rations.  Mabu, the eldest aged 12, had taken it upon himself to sell betal to provide food for the family.  He has been waking up before every dawn to buy materials, assemble the betal and try to sell enough to buy rice as their family dinner.  To Mabu’s tired face, I praised his maturity, ingenuity and love for his family.  It was hard for him to acknowledge praise when, in his mind, he was a failure because too often he didn’t make money to bring home dinner. When we spoke, the family had no food, money for food or for betal supplies to make money.

These fathers and their surviving sons, daughters and wives, have been simply doing what any family man would do- instinctively risking death to provide food for their starving families.

These boys’ loving memories of their fathers are the father and son bonding moments of bonding over providing a snack.

One month later, at the visual story telling, Mohamed Nuru and Shawbir, the 2 brothers, had healthier shiny hair growing in and the previous thin and dull hair, consistent with malnourishment, growing out.  I saw Mabu, their eldest brother on the road, he was short for his age, hair dull and eyes wrinkled and puffy from too little sleep.  So, Mabu was sacrificing himself for his family.  I gave him money, fruit and a special snack from downtown, just for him.  I told him, “Bawda beshi gum!”  Rohingya for “Big brother very good!”  An elderly man in flowing white tunic standing next to him put his hand on the boy’s dusty blue torn knit shirt covered shoulder and nodded, “Beshi gum!”  The worn out look on Mabu’s face faded as he and the grey speckled bearded man shared a warm smile.