The Colonial Origins of Hate Speech in Burma 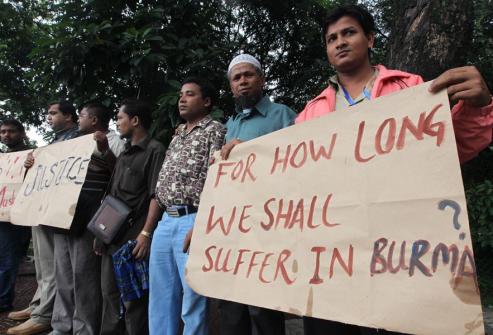 In past instances of genocide, hate-speech has drawn its power to inspire violence from some kind of popular appeal. In many cases, its purpose is to dehumanize to facilitate inhuman action. In Rwanda, Tutsis were referred to as “cockroaches;” in Burma, prominent monk Wirathu has referred to Rohingya Muslims as both “African catfish,” and “wild elephants.” More powerful, however, are terms that draw on long-remembered historical grievances. These terms have the ability to draw on a shared social memory of past injustice, real or imagined, which can only be righted by action, usually extreme and final, against the offending group. In Burma, the most popular hate-speech terms used against Rohingya, “kalar” and “Bengali,” both have roots in the colonial period of British rule from 1824 to 1948.

Along with administrative and cultural changes, British occupation brought overwhelming numbers of immigrants to Burma. According to records, at the turn of the 20th century, a quarter million people per year were being brought into Burma by the colonial government, displacing locals and creating tension in the region. Because many Burmese lived in fear of the British, they did not dare protest British rule directly – many riots in the 1930s took the form of anti-Muslim violence for this reason. It is from this period that the racial slur “kalar” appeared, roughly equivalent to “nigger,” referring to anyone with a darker, Indian-like complexion. This slur is so commonplace now in Burma it has even appeared as a descriptor for Rohingya in state media.1  The term “Bengali” is more nuanced and complex in origin and more insidious in its use.

At the sunset of British rule in 1946, the diverse region, comprising some 135 distinct groups, seemed poised to transform itself into a federal union characterized by semi-autonomous states. This did not happen, and instead, a nationalist-socialist government led by General Ne Win seized power in 1962, founding the “Burmese Way to Socialism” characterized not by federalism, but by nation-building by forced-assimilation.

While the orientation of Burma’s government alienated most ethnic minorities and created the conditions for civil war, the nationalist bent of the government did hit on one important populist theme for Burmese: rejection and atonement for colonial rule. Because of the significant role Muslims had played in the administration of Burma during British rule, the group became a pariah for nationalist Burmese who denied their long history in the region and alleged their illegal arrival during British occupation. Nationalists, especially in Rakhine State, would see no difference between long-established linguistically Bengali Muslim communities in the region and immigrants from Bangladesh, referring to all Rohingya Muslims as “Bengalis.” Because of the supposed priveleged status of Muslims under British rule (which actually only applied to Muslim administrators) and mutual massacres between Rakhines and Rohingya during the Second World War, the hatred is characterized by a sense of deep historical injustice, the power of which cannot be underestimated in its ability to inspire popular violence.  When, in 1982, the Burmese government legislated the removal of the most important legal protection of a person, citizenship, the government based its decision on whether or not people had arrived as a by-product of British colonial occupation. The targeted group was Rohingya Muslims, a minority in a country that is both primarily Buddhist and had suffered at the hands of the Rohingya’s coreligionists during colonial occupation. Popular myths are circulated that the Rohingya have an “alarmingly high birthrate,” that Rohingya immigrate to Rakhine State for economic gain, and that there exists a Muslim plan to take over Burma, all of which have been discredited as false.2

The threats to affirming the existence of Rohingya have been grave. At an October 2013 meeting, a Maung-Daw township administrator was quoted as saying: “You, Bengali people, entered Myanmar yesterday. Despite that, you people are annoying us a lot by claiming yourselves ‘Rohingya or such and such’ and making us at our wit’s ends. Don’t claim so and be fussy during the forthcoming 2014 Population Census. If you happen to claim ‘Rohingya’, we will punish you according to the law. No matter how much you scream, we will not give you even citizenship let alone thinking of ethnic rights. You may just get third-class citizenship. We are telling you in advance. Don’t create drama by claiming yourselves as ‘Rohingya or whatsoever.'”

Despite mountains of evidence showing the Rohingya’s legitimate history in the country, much of it now available online thanks to the efforts of prominent activist Dr. Maung Zarni,1 many nationalist Buddhists use the term “Bengali” to imply that the Rohingya are illegal immigrants from Bangladesh and have never had an official status in Burma. The term “Bengali” is used to de-legitimize the presence of Rohingya in Burma, and perhaps worse, deny their very existence. Hate-speech in this sense itself forms a recognized stage of genocide – denial. Denial of genocide does not always have to occur after a genocide takes place, but as is seen in present-day Burma, can actually serve as a cover to deny that a current genocide is ongoing – because the group subject to extermination does not have a basis in reality and thus cannot be targeted.  Both “kalar” and “Bengali” are ubiquitous in Burmese parlance, but of the two terms only “Bengali” serves to deny the existence of conflict and its near-universal use by both the Burmese state and private nationalist news agencies stands in the way of any considerations of reconciliation or peaceful coexistence, should these options even be possible. Only when “Bengali” is eliminated from official and popular channels can the historical grievances it implies begin to recede and stability returned to civil society.