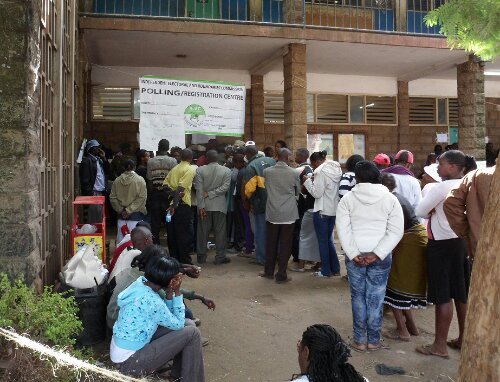 If you’ve been following the Sentinel Project’s social media updates recently, you’ll know that we just concluded our first-ever field work by sending a small team to Kenya, which was the second situation of concern (SOC) that we started monitoring. Abhishek and I returned home this past weekend and can say that the trip was a great success since we gained a lot of knowledge that will set us up for future work in the country. However, we didn’t always have reliable internet access while in Kenya, which is why we are only now starting to blog about the experience. Fortunately, this post will be the first in a small series which will delve into different aspects of our work there in greater detail.

As a brief introduction, we went to Kenya with two main activities planned. First, we acted as observers for the general election which took place on March 4. Second, we made a field visit to the Tana River District, where there has been serious ethnic violence in recent months.

In the case of election observation, this was directly related to the Sentinel Project’s risk assessment on the likelihood of mass atrocities in Kenya. Our analysts determined that the presidential election was the most likely trigger for a repeat (and possible escalation) of the post-election violence that killed over 1,000 people and displaced hundreds of thousands of others in 2007-2008. Though many organizations have made great efforts to prevent such violence from happening again, many of the same root causes are still present in Kenya, such as long-term ethnic rivalries, severe economic inequality, and leaders who manipulate ethnicity to gain political power. Any suspicion of vote rigging could easily have been used to incite violence, so having unrestricted access to the electoral process was important for us to understand it, any problems there may have been, and therefore the level of truth to any claims of irregularities. Fortunately, although there have been such allegations since March 4, they are being pursued in the courts rather than the streets and the country has remained peaceful so far.

Our field visit to Tana River, on the other hand, was related to a shift in our focus from the national-level risk of mass atrocities in Kenya as a whole to the local level, where we can have a greater impact as an organization. We realized that Kenya is too complex of a country with too many smaller conflicts taking place for us to really have a benefit by trying to address everything. Tana River, on the other hand, is home to primarily two ethnic groups, the agriculturalist Pokomo and the pastoralist Orma, who have been engaged in a violent conflict since August 2012. Since that time, almost 150 people have been killed in a series of small skirmishes and massacres connected to disputes over land for growing crops and grazing cattle, a conflict which has been exacerbated by environmental and economic pressures and encouraged by some local politicians. We met with members of both communities as well as local administrators and members of the security forces in order to better understand the situation and what the Kenyan government is doing to prevent further violence. Now that we’ve gone beyond the headlines and have this better understanding, our plan is to develop a long-term program to predict and prevent violence in the area.

Keep watching this blog over the coming days as we explore these issues and the results of the last few weeks in more detail.