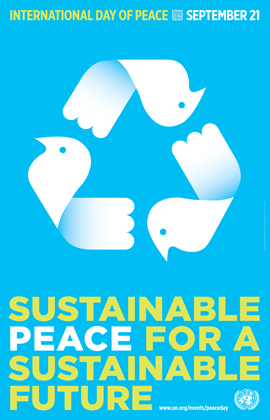 The day is dedicated to peace, or specifically to the absence of war. It provides an opportunity for people across the world to take part in activities that promote and further peace and unity.

It was established in 1981 to coincide with the opening session of the United Nation’s General Assembly, which was held annually on the third Tuesday of September.

The first Peace Day was observed in September 1982. In 2001, the General Assembly by unanimous vote established September 21 as an annual day of non-violence and cease-fire.

“Sustainable Peace for a Sustainable Future” is the theme chosen for this year’s observance. It focuses on the root causes of many conflicts that are directly related to or fueled by the ownership, control and management of valuable natural resources.

To learn more about Peace Day, be sure to visit the United Nation’s website.