97th Anniversary of the Armenian Genocide 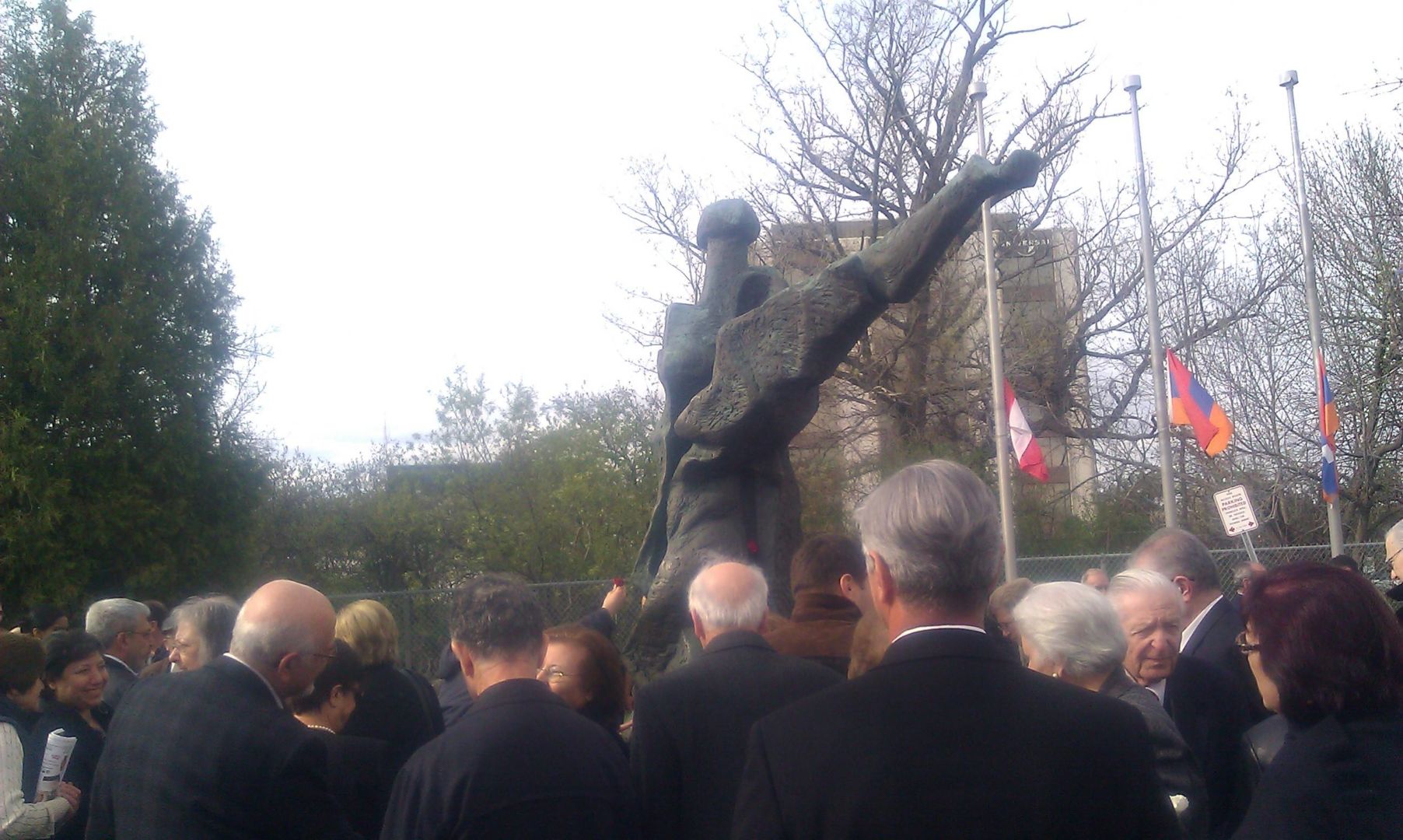 On Sunday, April 22, 2012, I was given the opportunity, with Abhishek, to attend the 97th anniversary of the Armenian genocide commemoration ceremony. Although much of the ceremony was conducted in Armenian, which I unfortunately do not understand, I was fortunate enough to sit with an older woman, Seta, whose parents would have been old enough to have lived through the 1915 genocide. Seta informed me that her personal losses included her grandparents and all of her aunts and uncles. Though she was not born before the genocide, Seta’s sense of hurt over the atrocities committed against Armenians was readily present. Now a grandmother herself, Seta reminded me, through talking about her granddaughter, of the hope that future generations can both remember past genocides and prevent mass atrocities in the future.
I was struck during intial presentations by the master of ceremonies of the collective memory of the Armenian community within Canada. Unlike many other cultures I’ve seen in Toronto, it seemed to me that even third-generation Armenian-Canadians are still actively participating in the roots of Armenian culture – including learning the language. Abhishek and I mused about this, and the idea that perhaps groups that have experienced genocide are brought closer together by the atrocities experienced in the past. The memories that were discussed during the ceremony seemed to touch one and all as not a thing that simply happened to ancestors, but as a crime which happened to an “us.” The collective memory of the Armenians in recalling the 1915 genocide against them is as strong in Canada, and amongst all generations (young and old) as I imagine it might be in Armenia itself. The kind of hurt experienced by the Armenian people, and by Jews, Roma and Sinti, Cambodians, Tutsis and moderate Hutus and others last century does not vanish within a decade or after a generation, but as witnessed at the commemoration, becomes part of individual identities and can bring about a sense of “togetherness”. The collective memory is preserved, as the Armenian population is preserved.
One of the largest problems plaguing the memory of the Armenian genocide is that of genocide denial. Turkey, as the last remaining part of the Ottoman Empire, the government of which committed the Armenian genocide, still refuses to acknowledge these crimes as genocide. After 97 years, a government who didn’t exist at the time can still not cede that 1915 brought genocide upon the people of Armenia. Canada has officially recognized the genocide, and locally, the Toronto District School Board has created a class for grade 11 students called Genocide and Crimes Against Humanity – which includes a full study and recognition of the Armenian genocide as the first genocide of the twentieth century.
But back to the issue of denial and why it is not only a big topic for the Armenians, but could also be dangerous for the world. As mentioned in the keynote speech by Mr. Hratch Varjabedian, the issue of denial further perpetuates hatred. When something so blatant as genocide occurs, the denial of the death, pain, and hurt that was experienced does not let the group that suffered rest. Their histories being contested continues to lead to more emotional suffering.
I was also reminded during the commemoration of the importance of remembering the mantra of “never again” and why it is important. There were no individuals there that would have physically been able to remember the Armenian genocide, and yet, the commemoration is such a critical event for Armenians to attend and for the world to be aware of. When we forget about the horrors of genocide, that is when the world will allow them to happen again. The lessons I learned from the commemoration were that forgetting leads to apathy and a denial of “never again,” denial leads to hatred, and when something so horrendous happens to a group of people, their ancestors are likely to continue to feel the pain of genocide. This commemoration reminds us that “never again” must become a reality and genocide must become an issue of the past.