The Sentinel Project started tracking the Baha’i community in Iran in August 2008.

Operational Process Monitoring is a continuous process of tracking events in an situation of concern (SOC) to identify event patterns and key actors involved. Events are classified according to the Operational Process model, which defines nine processes that underlie every historical instance of genocide. These processes, defined in detail in the section Stages of Genocide Model, all contribute to planning or implementing genocide.

You have access to the data visualization of the events logged in our Sentinel Conflict Tracking System by our Iran Research Team. You are able to visualize on a map the different events, at specific time and classified by tags. 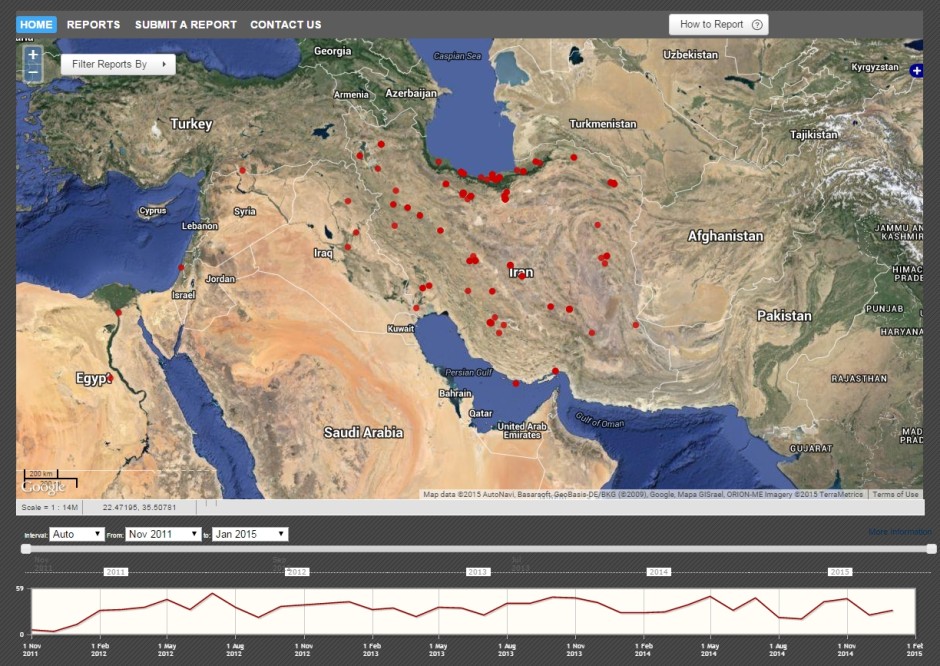 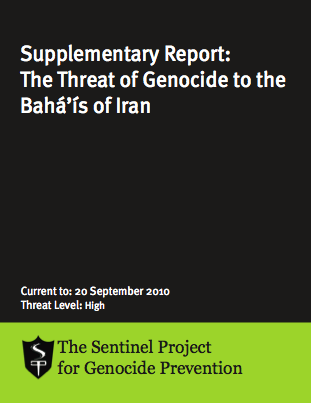 Supplementary Report: The Threat of Genocide to the Baha’is of Iran (2010)

Preliminary Assessment: The Threat of Genocide to the Baha’is of Iran (2009)

Baha’is are members of a global religion which originated in nineteenth-century Persia – the modern-day Islamic Republic of Iran – where they are currently the largest religious minority. They represent a population of 300 000 in the predominantly Muslim country of approximately 66 million people. The Baha’is of Iran have a long history of persecution at the hands of Muslim extremists and successive regimes who view them as a heretical sect. This persecution has often been violent, and has only intensified since the Islamic Revolution of 1979 which transformed Iran into an Islamic theocracy.

Since the Islamic Revolution, Baha’is have been systematically shut out of public life in Iran and have often had their safety threatened. All Baha’i public servants were dismissed in the early 1980s, the legal rights of the Baha’i Faith and its followers have been negated, Baha’is have been forbidden to engage in either public or private education, have been almost completely shut out of the economy, denied public services, and their leaders have been frequently arrested and executed without charge. Numerous Baha’i religious sites have also been demolished by state and religious authourities. Popular violence – with either the tacit approval or active encouragement of state authourities – has also risen and cases of arson and vandalism against Baha’is have risen dramatically in recent years.

Currently, seven of the top Baha’i leaders in Iran are imprisoned on accusations of acting as foreign agents for the Israeli government in an alleged attempt to overthrow the Iranian government and destroy Islam. The regime claims that the imprisoned Baha’i leaders recently confessed (likely under duress or torture, if at all) to this conspiracy. This accusation of ties to Israel is particularly troubling in light of a continuing campaign by Mahmoud Ahmadinejad, the Iranian president, to incite genocide against the Jewish state. Genocides are often planned to destroy perceived internal enemies believed to be acting on behalf of external forces. While Iran is unlikely to directly attack Israel, it may be likely to attack a helpless minority which it believes to work on behalf of Israel.

In light of all of these developments, the creation by the Iranian military and intelligence services of a list of the names and locations of all the Baha’is in the country, along with travel restrictions placed upon them, is all the more alarming.

The case of the Iranian Baha’is is an urgent one that few people are aware of. Watch for further updates as the Sentinel Project works on this issue.

The first Sentinel Project report assessing the threat of genocide to the Baha’is of Iran.

This document details background information, the preconditions for genocide in Iran, the potential perpetrators, and triggers. The level of genocidal development is assessed according to the “Eight Stages of Genocide Model”:

This is a frequently renewed report maintained by the Baha’i World News Service on the persecution of Baha’is in Iran. As such, it is one of the best resources for staying current on the situation.

A report released by the Human Rights Activists of Iran reveals that a government inspector has determined the innocence of 54 Baha’is arrested on 19 May 2006, some of whom are still in prison. These individuals were arrested and convicted of “indirect teaching” of their religion during a community education program. The Baha’i community has long denied these allegations but although this innocence has now been made known to the government and public, three of the Baha’is still remain in prison. Read the English translation of the report.

Baha’is have once again been prevented from enrolling in Iranian universities and courts have rejected complaints regarding this move.

A poster placed by extremists in the town of Najaf-Abad, near Isfahan, Iran has threatened the Baha’i community there with apparent retribution for their alleged propagation of “empty and void ideas authored by western imperialism,” among other false accusations.

Report of the Secretary-General on the situation of human rights in the Islamic Republic of Iran – 1 October 2008, The United Nations (link opens a .pdf file)

The latest report by the UN Secretary-General on the condition of human rights in Iran mentions the plight of Baha’is there, including “a significant increase [that] has been reported in violence targeting Baha’is and their homes, shops, farms and cemeteries throughout the country.”

The Iranian media is spreading accusations against the imprisoned Baha’i leaders and those who defend them. This is particularly alarming since the mass media often play a strong role in demonizing the victims of genocide.

The hardline Tehran newspaper Resalat has announced that the imprisoned Baha’i leaders have allegedly confessed to acting as Israeli agents.

There has been a recent increase in popular violence against Baha’i property.

Further details on the imprisoned Baha’i leaders from two weeks after their arrests.

First notice of the arrest of six of the top Baha’i leaders currently imprisoned in Iran.

This article details the ongoing official effort to deny Baha’is education in Iran.

This “documentary” accuses Jews and Baha’is of being in league to overthrow the Iranian government, destroy Islam, and enslave humanity.

NOTE: This video is an example of anti-Baha’i propaganda from Iran and should not be taken seriously. It is posted here in order to provide an example of the type of dehumanization that Baha’is in Iran are subjected to. The opinions and allegations presented in this video are untrue and may qualify as hate speech.

Background information and a historical overview of the situation of the Iranian Baha’is up until August 2005.